Don't Hate the Player...Hate the Game by Katie Ashley 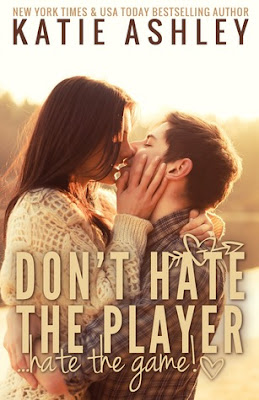 For Noah Sullivan being the best friend to a douchebag and player like Jake Nelson has never been easy. It's been a rocky road since kindergarten when Jake duct taped Noah to his chair before recess. With just six weeks to high school graduation, Jake accidentally blows his drunken ass up on his grandfather's tractor, and Noah finds himself immersed not only in a whirlwind of grief, but on a quest to find a mystery girl from Jake's past.

Since Jake was a notorious player with a legendary collection of trophy panties, Noah finds himself in over his head. There are the usual suspects like Avery, the Ice Princess Jake dated for appearances, or Presley, the school mattress Jake dated for convenience. But the trail begins to point to the most unlikely of suspects: Maddie, the Valedictorian and choir girl who was trying to help the unmotivated jock graduate--the girl who also has surprisingly caught Noah's eye and meddled with his heart.

Hanging out with Maddie shows Noah a different side of Jake--one that was deeply human and surprisingly douche-free. And the more he tries to solve the mystery of the ring and of Jake, the more Noah starts to discover about himself and of love.

Don't Hate the Player...Hate the Game was a frustrating read. In fact I didn't finish it. I only got to 53%, which is my self-imposed rule. If I write a review of a book I have to read at least 50%. And somehow I made it to that point. So I don't know what happens, but I read some spoiler reviews and it doesn't sound like it gets any better. If anything it might get worse...

This story starts off with Jake dying. Jake who is Noah's bff and seems like a right jerk, but everyone loved him for some reason. The story of how Jake and Noah became bff was odd. He duct taped Noah to a chair and somehow that equals friends. Okay. The story was told a few times, but I never understood why that meant they were bff. I just...I didn't care for Jake in the remembrances so I didn't really care that he had died. Noah has a hard time handling the loss, but then again he hasn't dealt with his grandfather's death from two years prior yet.

So when Noah and Jake's dad are going through his room after he died they find a ring. Like an engagement ring. But who could the girl be? It was painfully obvious who it would be immediately, but Noah doesn't consider her for way too long. I mean he keeps thinking maybe it is one of the many girls he just hooked up with on occasion. Sure, I buy that. Not the girl who thought he was super nice and saw a different side of Jake. No, not her. Definitely not. Let's not even consider it even though she keeps telling him how kind Jake was and all the great stuff Jake did that no one knew about. How Jake was changing into a better person. Yeah, definitely not that girl. Probably one of the many that he didn't really care about. Makes sense.

One of the big problems was I didn't like any of the characters. Noah was hard to read. He is supposed to be a "real" man. He can't show his emotions, he is a misogynistic homophobic jerk and yeah not cool. Sure other people might correct him when he says something super lame, but I don't want to read his kind of bs all the time. I hate that posturing and it was not done in a way that I believed it. I know he is a teenager and teenagers can still be trying to figure things out, but he didn't come across as real to me so it didn't work.

Maddie, the preacher's daughter, was also annoying to read. She comes across as way too sanctimonious for my tastes. Ugh. Not good.

So then around 45% the story really lost me. Up until then I wasn't enjoying it, but I didn't absolutely hate it either. I was still reading. But 45% is where is starts to get all pseudo-religious. Noah tells a long story about how he got this bible from his grandfather on his death bed, he turns to the bible for comfort now and find something in it, his mom tells him why she named him Noah (because he would have a hard life not having a father and being illegitimate. Noah had a hard time in the bible too! But he was favored by God! So maybe Noah will be as well). It was not for me. I don't mind religious characters, but when it comes across as preachy or way too 'God is the answer' I don't like it.