This Love by Anna Bloom 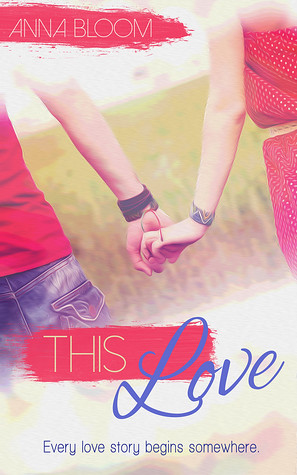 
Amber's always planned to leave her overbearing mother and their stifling small town behind as soon as she graduates. That is until her car breaks down outside Bale and Son's mechanics and she meets Freddy Bale. A boy who'd rather live in the moment than make a five-year-plan.

Ignoring her friends' warnings, Amber puts all dreams for her perfect future on hold, and dives into the romance heart first. On their last day of school, however, Freddy decides to call off their relationship, and Amber does the only thing she can think of: Run away and never look back. Just like she'd always planned.

Ten years pass before Amber sets foot in town again, only returning to look after her ailing mother. While Freddy wants to make amends, Amber is confronted with her own wrong choices from ten years ago. Choices that could change the lives of everyone she's ever loved.

When first love is given a second chance and the secrets of the past come hurtling into the present, will Amber and Freddy be able to lay their mistakes to rest and make this love the strongest one of all?

This Love was just a meh read for me. I wanted to like it I really did, but it didn't start off that well for me and didn't get better along the way. **Some slight spoilers ahead**

So I should start by saying one of the things I really dislike in books is secret pregnancies. Unless there is a really good reason, the girl fears the baby daddy, the dad is abusive, etc., then I hate when they just decide to not tell the father they are going to be a father. I really can't stand that as no matter what you feel for the person, how hurt your feelings are, they deserve to know their child. Or at the very least the child deserves to know the rest of the family that he has.

The first part of this story, the before story, was just okay. I didn't feel the connection between the main characters so it was not as good as it could have been. I didn't see that they were really desperately in love, but I went with it hoping it would get better in the after section.

Amber and Freddy meet by chance one day when her car breaks down near his garage. They of course knew who each other was, but never really interacted. That was all it took for their whirlwind romance to start. From that moment they became inseparable even though Freddy was a tad older and Amber was applying for and going to go off to college. Only with Freddy still in her hometown she doesn't want to go off anymore. Especially after what happens to Freddy. She wants to give up everything to stay there with him and help him out. I liked Freddy, as much as I like anyone in this story, especially because he wouldn't let Amber give up everything for him. He knew that she would regret it one day and he didn't want to be that weight around her neck that kept her down. He wanted the world for her so in his clumsy way he tried to give her that. Only things didn't work out as planned and she stayed away for ten long years.

When Amber's mother starts getting really sick Amber finally comes home to help care for her. And she is not alone. She has Isaac with her. Isaac who is Freddy's son he didn't know he had. After a rough start, Amber upset by how Freddy tossed her aside so long ago and Freddy angry she never told him about his son, things get back to "normal" between the two of them. The fall back into their love for each other that neither really ever let go of. There is an soon to be ex-husband on Amber's side who gives them some problems and some really stupid decision making on her part that results in way more drama than there should have been in the last part of the story. She really doesn't seem to think sometimes and the last big bad thing that happened had me rolling my eyes so hard and yelling at Amber to just suck it up and do it already!! Then when things get worse it came off as just added drama for drama's sake and Amber yet again makes some poor decisions, but thankfully Freddy comes along and saves the day. Really without him I don't know what Amber would do. So yeah. I didn't really enjoy this read. Amber annoyed me at times, I yelled at her a lot, and I didn't really see the connection between the characters. Not the book for me.