All of it by Kim Holden 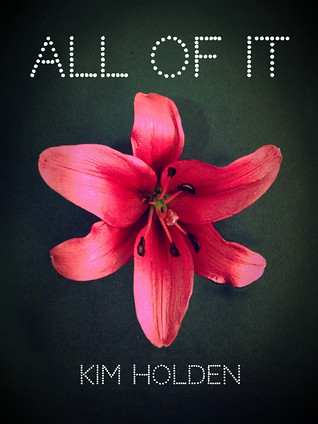 
Seventeen-year-old VERONICA SMITH has it all: a loving family, a funky car named Jezebel, and a plan to go to college after graduation. On the first day of senior year, she meets DIMITRI GLENN--a mysterious transfer student with gray eyes and a mischievous smile who seems determined to win her heart. But there's something odd about Dimitri, leading Veronica to wonder if there's more to him than meets the eye. Before long, she finds herself in a whirlwind romance that seems too good to be true--until a series of devastating events leaves her questioning everything. It's not until she chooses to think with her heart instead of her mind that she can rise from the ashes to learn the truth of their connection.

All of It was very disappointing. After reading, loving, crying through Bright Side I expected another amazing read. I know this was the authors first book, but still I wanted more. Maybe if I had read it before Bright Side I wouldn't have disliked it as much, or maybe I would have and then not read her other books. Or maybe I have just read to many other great books with similar themes that I enjoyed so much more.

So I guess I won't talk a lot about what is really going on in this story (even though I found it obvious from the beginning and a bit frustrating that it is not revealed until the end) as I don't want to spoil it for anyone. This is the story of Roni and Dimitri. Dimitri who right from the first moments is taken with Roni. Roni who sees herself as nothing special and is not really sure why he is so taken with her. Not that that stops her from letting him in and seeing where this will go.

Dimitri is the new kid at school, though he doesn't seem to care about anyone but Roni. He is so sweet with her, so kind and caring, so loving, just so great. He is an amazing boyfriend, but Roni was really frustrating to read. I didn't understand her or why she did the things she did. I was told she had a hard time asking for help, that she had to be the one everyone counted on and wanted to be there for her friends and family. That it was stressing her out if she wasn't, but I didn't really see it. I didn't see that she couldn't ask for help. I didn't see that she had this great need to be there for everyone. I just didn't see a lot of what I was told about her. It felt like there was a lot of telling not showing with a lot of the story so it wasn't as emotional as it should have been. I mean there were some big emotional stuff that happens, but I didn't really care that much because I wasn't invested. Sad as Bright Side is the only book to ever make me cry big tears while reading. I was hoping for a similarly emotional journey with this story, but it was not to be.

So I guess that is all I will really say on about this story. Dimitri was amazing, Roni was annoying, I didn't understand her, and there were a lot of ups and downs. As I said I knew what was going on from the start so it was also a little annoying that it did not come up at all until the very very end when it was revealed in this big data dump. Such a let down as for most of the book I kept waiting for it to come up, or be slowly revealed, or something. As it was I thought the story would just end without bringing it up at all. Oh well, this wasn't my favorite read. I will still read more from this author as Bright Side and Gus were amazing, but this one just didn't work for me.