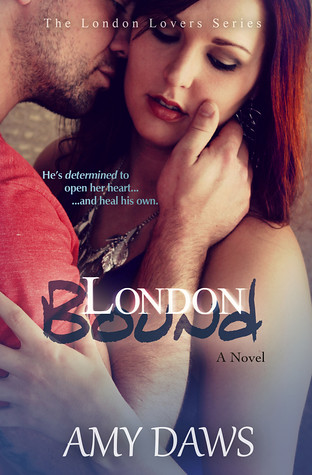 When Leslie Lincoln, a spunky, red-headed American, suffers an awkward moment with an arousingly-sexy British man—she thinks her life can't get any more pathetic.

She's done with men.
She doesn't need them.
She especially doesn't need their muscular thighs.
No siree, she's going to forget all about the brooding, complicated, and seductive "Theo" who captivated her on the dance floor of a London nightclub.

Keep telling yourself that, Lez.....

Immersing herself into a new type of romantic cleanse, Leslie thinks she'll never lay eyes on Theo again. But somehow, he's managed to bulldoze his way back in—her cheetah-print onesie pajamas be damned.

He wants more.
She wants to run.
But he can’t seem to let her go.

Both of them have a past—and neither want to share.

How can love possibly survive in darkness?

I wanted to really like London Bound. I loved the first book in this series (which actually came out second), didn't care for the second book and was hoping this third book would be just as good as the first. Unfortunately I just don't care for the character in London. I...I know they are supposed to be fun and sassy and whatever, but to me they were just annoying. I see where other people might find Frank funny, I see where others could enjoy it, but it was just not for me.

Leslie has some secrets she hasn't shared with anyone. Not even her bff Finley who she is supposed to share everything with, cracks and all. She just can't talk about it. She ran away to London a few years ago and is trying to just keep the past in the past. She is not going to have a relationship with a guy again because of whatever happened and that is that.

Theo is smitten with Leslie as soon as he sees her. He has his own secrets, his own dark past, but Leslie sparkles. She brings him back into the light and once he gets a glimpse of that he never wants to loose her. He knows she is the one for him, he just has to get her to stop running from them so they can live happily ever after.

Now the first part of this book annoyed me greatly. I did not like the flashbacks interspersed in Finley and Brody's wedding chapters. Some of them, like how Leslie met Frank, I didn't care for at all. I could have skipped that and been happy. It just wasn't done very well for me so it wasn't good. Then Leslie obviously has something bothering her, she is always putting herself down and not trusting that Theo could actually like her, which should have made me feel for her. At least a little. I mean obviously she has been through something right? Only I did not like her at all. The way she was written was so annoying to me I couldn't stand her. She didn't feel real to me I guess. Like I didn't believe she really was struggling with something if that makes sense. I just...I kept reading only to find out what happened and when I got to that part I thought this is it? Really? I know it wouldn't have been easy and all that, but it just was a bit of a let down.

I don't know. I liked Theo well enough, but it was really the story of Leslie so it didn't work for me. I don't think these books are for me. I don't like the "sassy" London characters. I don't find them humorous, they just annoy me. Greatly. I see where others would like it, but it is not for me.