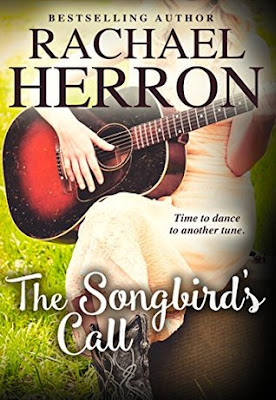 
From international bestseller Rachael Herron, comes a book too delightful to put down:

Once Adele, Molly and Lana were The Darling Songbirds, a world-famous country band. Now they're just three sisters who barely speak. But that's about to change.

Middle sister Molly arrives in town, and is immediately drawn to the neglected little café where she worked as a teenager. Could she dare to bring it back to life? As lead singer, Molly had always been the voice of the band. But caught between controlling big sister Adele and demanding baby sister Lana, she never felt heard. If she's going to reopen the café, she'll do it on her own terms, no more being bossed.

So the last person she should fall for is the handsome Sheriff Colin McMurty - the man whose job it is to tell people exactly what to do.

The Songbird's Call was such a beautiful read. It has been a while since I read this author, but now I am thinking what took me so long to read the rest of her work? This story was simply fantastic and wrapped me up in the warm fuzzies that I love so much. It was almost Laura Florand like while reading. It is like the author spirited me off to a magical land where everything is so beautiful I can't help but be totally in awe of the story. That is not to say the characters and everything weren't real and have their ups and downs and everything, it just made me feel all warm and fuzzy inside (even when they did things I may not like). It was wonderful.

I should note that though this is the second book in a series I haven't read the first book yet (though I will be changing that soon). As such it was fine as a standalone, but really just made me want to read more and more and more. I didn't want the story to end so it is nice that I have another book still to read. Then I wasn't so sad to see this story come to a close.

Alright as for the story itself? Well this is the story of Molly and Colin. Molly of the famous Darling Songbirds. I am not sure what exactly happened to the three sisters who used to be so close, but this story is a few years later after they have all dispersed and haven't talked much since. Molly's sister was in the first book and the first to come back to Darling Bay and settle down. Now Molly is back for a bit for a surprise visit and she is not planning on sticking around. It is hard being back where everyone knows you and everything that happened. It is just not for Molly even though she loved the time she spent there as a kid. Molly was an interesting character. She has a bit of self esteem issues. I mean she was the larger sister, so everyone always commented on her weight. I can't imagine what that would be like when you are in the spotlight and are not stick thin. People can be very brutal, especially online where they feel anonymous, and Molly still struggles with self image issues. That and some poor choices she made after the band broke up make her think she is not doing so well. She needs to stop and recharge and get herself back before she can figure out what she wants to do with the rest of her life.

Colin is the sheriff in Darling Bay. He grew up there and hasn't had it easy. He is not used to wanting things or hoping for things as he never seems to get them, but he always liked Molly. She was the one he was drawn to, not her sisters. In his eyes she was perfect. But she would never go for him. Until she comes back to town and they start to get thrown together. Then for the first time he sees that maybe he could have something here. Something amazing. If they can both stop being afraid and face this together. They were so cute. I loved how they just kept getting in these ridiculous situations. I loved how Colin was bossy, but Molly wouldn't put up with that. I loved how long it took the two of them to see what was there between them. Really I just loved these characters.

Now I didn't always understand Molly or her reasons for doing things. She is one of those people that has to do everything herself. If she gets help then she didn't do it and it wouldn't be hers. I don't really understand that as everyone needs helps sometimes, but I know people like that. She also lets her insecurities get in the way sometimes and cause problems with her and Colin. Sometimes I felt so bad for him as she would be so hot and cold. He would think things were fine, then she would be cold and he would feel terrible that he did something to hurt her, when really it was just Molly and her issues. She also was always running and afraid of everything. Even at the end she is too afraid to try and fix some issues she has. Instead she would rather be miserable when it would have been easy to fix if she would put on her big girl pants and face her problems. She did get on my nerves at times, but the writing made it so I still loved her. Yes, I didn't always understand her, but she was still great to read. I may have yelled at her a bit at times, but that is okay. The author made me still care for her and want nothing but good things to happen.

Overall this was a wonderful read. Molly could be annoying at times, but the writing made me not care so much. Made me still love her when otherwise I might not have. That is the test of a really great author. Make me love a book and characters I otherwise wouldn't. And Colin? He was wonderful. Not perfect, but always trying to do right by those he cares about. This was such a sweet, wonderful, beautifully written story. I highly recommend it even if you haven't read this author before. Get wrapped up in the warm fuzzies. You won't regret it.

Note: I received a copy of the book in exchange for an honest review