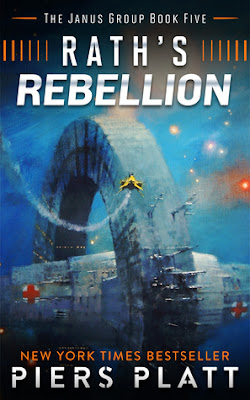 
After he's found guilty of murder, Rath is saved from a death sentence by a mysterious new ally. His newfound friends have a daring plan to rekindle an old revolution, and they want his help. If it all works, Rath could clear his conscience at last, and pay his debt to society. But starting a rebellion will put him squarely in the sights of Beauceron and Paisen as they rush to prevent the looming war. And even Rath's best-laid plans can go astray ...

Rath's Rebellion is the newest book in the Janus Group series. You should definitely read the prior 4 books before starting this one. This is a continuation of the same story, though the second book in a new trilogy with the same characters from the first. A what happens after the events of the first three books.

Rath's Rebellion was so much fun. I really love these books. I love the characters, I love how the trilogy starts out with everyone in a different place doing their own thing, then somehow they all get drawn together into the same events. It doesn't feel coerced or anything, it just naturally works out that way. It is awesome!

So in this chapter we have Rath finding out who the people are who saved him and what they want. It was interesting because they were famous a long time ago for some not so good things, but like Rath the leader feels some remorse over his actions and the results. It was nice getting the addition of these new characters even if they had an idealistic view of what would happen in the end.

We also have Paisen trying to figure out what happened to her people and what is really going on, and Beauceron and his partner looking into recent events. I also really enjoy Dasi in this series and can't wait to see where she ends up. These books have so much going on, so many different people who end up interconnected, and I need the next book to see what happens! Rath always seems to get himself into a bind, but somehow bumbles himself out of it. I love it. I love all these characters and the whole world this author created. If you haven't read these books yet do yourself a favor and go get them. They are fun, exciting, entertaining reads. I never thought I was a big sci-fi fan, but these books have made me seek out more to read. They are simply great stories.