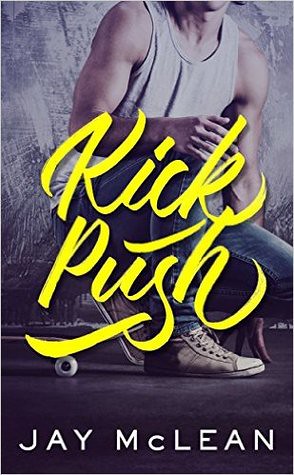 
There’s a single defining moment within every skater.
It lasts only a second. Two if you're good.
Three if you’re really good.
It’s the moment you’re in the air, your board somewhere
beneath you, and nothing but wind surrounds you.
It’s the feeling of being airborne.

The sixteen-year-old version of me would’ve said it was the
greatest feeling in the world.
Then at seventeen, I had my son.
And every single second became a defining moment. Even the ones that consisted of heartbreak when his mother left us.

Seventeen. Single. Dad.
That’s what my life became.
Yet, every day, I managed to find that feeling of being
airborne.
Or at least I convinced myself I did.
But I lied—to myself and to everyone around me.
Until she showed up; Tanned skin, raven dark hair, and eyes the color of emeralds.

You know what sucks about being in the air?
Coming down from the high.
Sometimes you land on the board and nail the trick.
Then kick, push, and coast away.
Other times you fall.
You fall hard.
And those are the times when it’s not as easy to get back up, dust off your pads and try again.
Especially when the girl with the emerald eyes becomes your drug...


And you become her poison.

Kick Push was a great read. Really I got to the end and immediately jumped online to get the second book. It doesn't end on a huge cliffhanger or anything, but you know Josh and Becca have more story to tell. Oh it was fun.

Josh is a single dad. His girlfriend got pregnant when he was seventeen and left shortly after giving birth so he has been raising his son Tommy alone. He loves his son so much. He would do anything for him. There was never a question of if he should give him up or anything. He is trying to give Tommy everything he needs and wants, but it is hard. He doesn't have anyone to really help, no family who will stand by him and help him out. He is struggling for sure, but he only cares because he wants Tommy to have everything. Oh he was amazing. To see how much love he has and how amazing of a father he is especially with how rough he has it was wonderful. You can't really help but love Josh when you see everything he does for Tommy.

Luckily when Josh was really down on his luck, when he was trying not to break, an older lady steps in and helps him out. She has her reasons, but really she gives them a place to stay and a bit of support when he needed it most. And after that things started to get just a little bit easier. He found more support, more people to help him out and be there when he needed someone. He has a job and is doing well, skateboarding in what little free time he has. It is still his passion, but he can't focus on it as much as he once did.

Josh is getting along fine and is fairly happy when Becca comes into his life. Or really her grandmothers life, the lady who took in him and Tommy. She is broken, so broken, but Josh is drawn to her. She doesn't talk, she doesn't like to be touched, she doesn't seem to like to be around people, but Josh wants to help. He is so freaking sweet with her I couldn't stand it. I loved him so so so much.

Becca hasn't had it easy. She has a lot of demons that she needs to work on, but somehow Josh makes her feel safe. He is always there and she can't help but fall for him. Really I don't know how anyone could resist. And even though I was glad for the two of them to be together and try and work things out I have to be honest here. I never really felt like Becca was in love with Josh. He was just there and safe, but I didn't see that she cared for him as much as he cared for her. It was alright, but I didn't love her like I did him. I was just happy as long as he was happy.

Now these two both have their issues. They both keep a lot of things bottled up and there are some rough moments. My heart would break for the two of them, especially once you learn everything Becca has been through. I can't wait to read the second book and see what is next in store for these two. I really hope Josh gets everything he has ever wanted. I hope he gets to be as happy as he deserves. And if that is with Becca like he says then I hope the two of them just have fun, happy adventures together. Really a great read.