Trade Me (Cyclone #1) by Courtney Milan 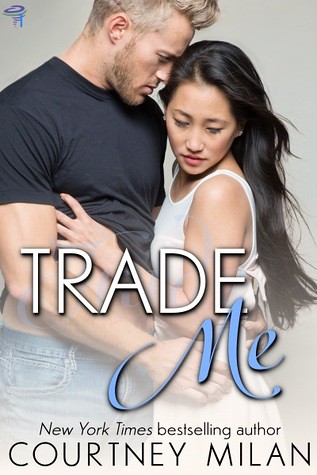 
Tina Chen just wants a degree and a job, so her parents never have to worry about making rent again. She has no time for Blake Reynolds, the sexy billionaire who stands to inherit Cyclone Technology. But when he makes an off-hand comment about what it means to be poor, she loses her cool and tells him he couldn’t last a month living her life.

To her shock, Blake offers her a trade: She’ll get his income, his house, his car. In exchange, he’ll work her hours and send money home to her family. No expectations; no future obligations.

But before long, they’re trading not just lives, but secrets, kisses, and heated nights together. No expectations might break Tina’s heart...but Blake’s secrets could ruin her life.

Trade Me was such a fun read. Blake and Tina are so cute together and they both have some issues to deal with before then can reach their happily ever after, but they were awesome.

Tina is a poor college kid at a rich school. Her classmates don't know what it is like to not have money. They don't know what it is like to have to survive on $10 for food for the foreseeable future. They don't know what it is like to have to send $30 home every month so her sister can get her medication and how that $30 is the world to her. How an extra $10 is just not there. She doesn't have it. She survives, but she knows what it is like to be cold, to eat rice for dinner, to not have much. She loves her family, but she seems to be the only responsible one in her family. Her sister is too young and her mother spends her time helping other Chinese families work their way through the immigration process. They escaped China when they would be persecuted for what they practice, but they have made a life in the US. A life that Tina is hoping to be able to help with once she becomes a doctor. She always plays it safe, she is always careful, and she knows as a doctor she can make enough money to support her family. And that is all that she wants.

Blake is a rich kid. Or the rich kid on campus. Everyone knows who he is as his father is the head of a very famous company. Everyone knows that he will be taking over at some point so everyone tries to get close to him. Although he has a problem. He doesn't think he can. Ever since his father's CFO and friend died he just doesn't think he can do it. He is in college as a way to escape for a bit, to try and figure out and fix his problem before he has to go back. His father doesn't know and keeps pressuring him to come back, to work more, to forget about college.

When the class that Tina and Blake share starts talking about public assistance, when the people in class start talking about how everyone on it is lazy and such, Tina can't just sit there and take it. She sounds off and I loved it! She is so feisty and wonderful. She might be poor, but she can take on anyone if she needs to, even Blake. Oh it was fun. That first time they had a conversation I loved it!

When Blake realizes that he doesn't know what it is like to be poor, that Tina challenged him with the fact that he wouldn't last two weeks living as she does, Blake thinks this is it! He can switch lives with her and maybe this will fix him. Maybe if he sees what it is like to live as she does then he will be okay to go back and work at his fathers company. Tina is super smart and can easily take over some of his obligations with said company and they can work together on anything she can't. Plus he can give her an allowance which would really help her out. Things could be a bit easier for her in the future. She wouldn't have to work while going to school, she would have a bit extra to send to her parents, the "little" amount he will give her is huge to her. She has reservation, but of course she has to take the deal. It is just too good to pass up.

When one of the terms is that she has to pretend to be his girlfriend oh it became so much fun! The both of them are attracted to the other, but Tina being Tina doesn't want anything to happen. She needs to play it safe and dating Blake for real is not safe. Oh I loved it. They were so cute. They were there for each other and helped each other so much while growing closer. It was great.

Though I loved Tina and Blake together my absolutely favorite part of the book was Blake and his father's relationship. Oh my goodness I loved them! They love each other, though to an outsider it might not seem like it at all times. They call each other names and swear at each other, but it is a form of endearment. It was so so fun to read. Most people do not talk back or stand up to Blake's father, but Tina? Oh she won't have any of his nonsense. She won't stand for him slighting Blake or trying to pull one over on her. Their first meeting, the father and Tina? I laughed so hard. She is a spitfire and can give as good as she gets. It was wonderful and I loved seeing the three of them together. These characters were fantastic and it is not often when a father son relationship trumps the main couple in a story for me. I couldn't help but love Blake even more because of how he is with his dad. A really wonderful read.