Beneath This Mask (Beneath #1) by Meghan March 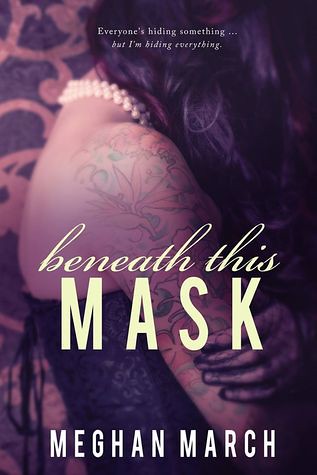 He loves me, and he doesn’t even know my real name.

The limelight that follows him could expose everything I’m hiding. But even knowing the risks, I can’t force myself to stay away.

I’m going to break his heart, but mine will shatter right along with it.

Will we lose it all when I reveal what’s beneath this mask?

Beneath This Mask was a better read than I was expecting. The synopsis just sounded okay to me, but I really was drawn into the story right from the start. Yes, Charlie could be annoying at times, but she was written in such a way that I still liked her and enjoyed her story.

Charlie is hiding from her past. Her father is in jail for fraud and the FBI is looking for her as they think she might know something. Instead of sticking around she ran. She changed her name, tries to make sure people don't get too close to her and hopes no one will find her. She is now working at a tattoo parlor and has some ink herself. Really she changed her look so much in the hopes that no one will realize who she is. Plus she likes the tattoos and such. She feels like she can't tell anyone who she is or be in the spotlight at all as her father messed everything up.

Simon is the son of congressman and just starting his own political career. He is ex-military and still has a few issues there that he doesn't want anyone to know about. I really enjoyed reading him. He is such a great guy. He likes Charlie, wants to get to know her and see where it will lead, but Charlie knows she should stay away. It would be in his best interest if they didn't start anything, but she also doesn't want to stay away. She has been hiding for so long and he is so sweet. When she offers him one night he refuses. Sure he wants her, but he wants more than that. He was a really great guy and perfect for Charlie.

The two of them have a lot of secrets between them, but Simon is not one to give up easily. He knows Charlie is keeping stuff from him, but that doesn't stop him from falling for her. He was such a sweetheart and really dealt with her ups and downs well. She is just afraid of letting him in and what will happen when he finds out who she really is. She doesn't want him to leave her which he very well could do if he ever found out her secrets. She is still running even if she is standing still. Eventually she has to decide if it is worth it, if Simon is worth it, and if she is ready to really trust him.

I will say I really enjoyed this story especially what happened when her identity is revealed. This was not the simple everything is okay, no worries, nothing happens story. It felt more realistic even if because of circumstances it wasn't as bad as it could have been. Charlie is not always the smartest and I liked that she struggled a bit and had to learn from her mistakes. It was a really great read and I am looking forward to reading the next in the series.