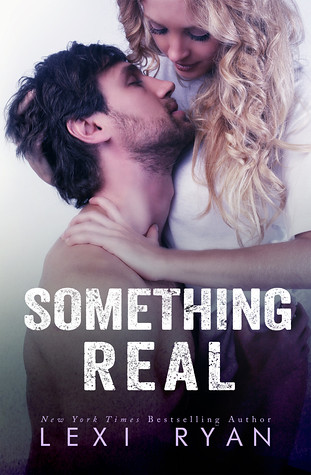 
After everything blew up on Christmas, Liz walked away from me, and I let her. She said she needed space and a chance to pursue her dreams. But we both knew she was running from the mess she made. Now the political campaign she used as an excuse to leave is bringing us back together and I’m proving to her what she really needs—not just the hot nights, greedy hands, and undeniable physical chemistry. What she really needs is something real. What she really needs…is me.

Note: Something Real is a continuation of the story started in Something Reckless. You definitely should have read that book before starting this one or you will not know what is going on. Spoilers for book one ahead!

Something Real starts up right where Something Reckless left off, then jumps forward a bit to see the outcome of everything. Liz runs away when she realizes it was Sam's dad she was talking to and she feels horrible. She blames herself and she is the one who made such a mess of everything. And Sam blames her as well. At least at first. I understand Sam being upset, but I don't really know why anyone things Liz did anything wrong. She stopped what she was doing as soon as she realized it wasn't Sam she was talking to. She didn't do anything except not tell Sam that before they got together she talked to someone online. No big deal really, only it turns out it kind of is when they find out who it was, but still. So Liz and Sam are not together as he can't seem to get it together and go apologize to her. They are both miserable, but then a whole bunch of drama lands in their laps and ack!

Normally I don't like super drama for no reason stories. I knew from the start what was going on and who was behind everything, but I still really enjoyed reading this story. Liz and Sam have so many issues, so many things going on that they have to try and work through, and they still don't talk to each other. Liz keeps getting hurt, but keeps not giving up on Sam. And Sam is a bit dense at times. He doesn't see that what is happening hurts Liz no matter how much his intentions are good. He wants to try and help everyone, but he really should have called things off much sooner. Liz is an incredible person to be able to be hurt so much and yet still come back to try and work things out with Sam. There is a super connection between these two that I don't think anything could break. Not other people, not outside circumstances, nothing. I think that is why I didn't mind the drama as much. I loved the couple so much that the drama was fun instead of annoying.

The one thing that was a bit disappointing was the ending. The big take down of the "bad guys." I wanted a bit more from that instead of what felt like an easy out. Still fun and I would recommend this series.