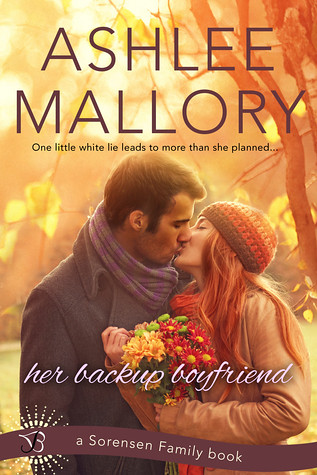 
One little white lie leads to more than she planned…

Straight-laced lawyer Kate Matthews always plays by the rules. But when her ex gets engaged and a big promotion is on the line at work, she blurts out that she has a new boyfriend. And now that she’s proved she “has a life” outside of work, everything is perfect. Except for one teeny little detail—there is no boyfriend. And now Kate’s liable for her little white lie…

Dominic Sorensen is hot, charming, and very definitely not Kate’s type. But not only does Dominic want to help Kate renovate her home, he’s also willing to play “boyfriend.” All he wants in return is a little pro bono work for his sister. Now instead of Mr. Right, Kate has a delectable Mr. Fix-It-Right—and some unbelievable sexual chemistry. And if falling for Dominic is a breach of contract, Kate is guilty as charged…

Her Backup Boyfriend was a cute read. Light and fun and enjoyable. Kate and Dominic were really cute together.

Kate is a lawyer who always plays by the rules. She still works with her ex, the guy she thought she would marry one day, and it is tough. Especially since he is now engaged to the gorgeous new lawyer at the firm. She is in line for a promotion, something she has been working her whole career for, the next step in her grand plan, only she needs a significant other. When the position is dangled in from of her she snaps and say she has a boyfriend. Only she doesn't. Not really.

Dominic is super sweet. Hot, nice, charming, everything you could want in a guy. He works for his father's construction business, but his real passion is restoration. He was going to school for architecture, but when his family needed him he dropped everything to be there for them. Only in doing so he lost his girlfriend as that was not the life she has envisioned. It put him off women a bit, but when he meets Kate there is a small spark. She is so straight laced and he thinks what would it be like to get her to loosen up a little bit?

When Kate needs some renovation work done, Dominic is her guy. Things just fall into place and when he finds out she needs a boyfriend for her firm events they figure out this will be perfect! He needs someone to help his sister with a messy divorce, but the sister won't take handouts. Only if Kate pretends to be his girlfriend then offer her legal services maybe she will take it and everyone wins. Dominic's sister gets help, Kate gets her promotion, everything should be wonderful.

Of course through all of this pretend dating they really fall for each other. Kate always thought she wanted her ex back, but now that things are heating up with Dominic does she really want that? Plus when things at work get a bit tricky she has some big decisions to make. These two were really cute together. They have some ups and downs, but it was a light, fun read.