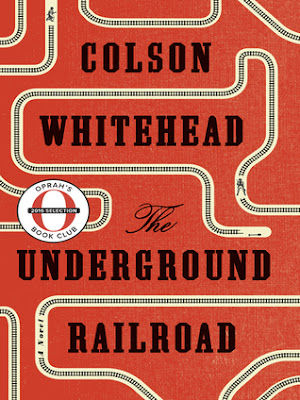 Cora is a slave on a cotton plantation in Georgia. Life is hellish for all the slaves but especially bad for Cora; an outcast even among her fellow Africans, she is coming into womanhood - where even greater pain awaits. When Caesar, a recent arrival from Virginia, tells her about the Underground Railroad, they decide to take a terrifying risk and escape. Matters do not go as planned and, though they manage to find a station and head north, they are being hunted.

In Whitehead's ingenious conception, the Underground Railroad is no mere metaphor - engineers and conductors operate a secret network of tracks and tunnels beneath the Southern soil. Cora and Caesar's first stop is South Carolina, in a city that initially seems like a haven - but the city's placid surface masks an insidious scheme designed for its black denizens. Even worse: Ridgeway, the relentless slave catcher, is close on their heels. Forced to flee again, Cora embarks on a harrowing flight, state by state, seeking true freedom.

As Whitehead brilliantly re-creates the unique terrors for black people in the pre-Civil War era, his narrative seamlessly weaves the saga of America from the brutal importation of Africans to the unfulfilled promises of the present day. The Underground Railroad is at once a kinetic adventure tale of one woman's ferocious will to escape the horrors of bondage and a shattering, powerful meditation on the history we all share.

The Underground Railroad was an odd read for me. The whole idea of the underground railroad being an actual railroad...didn't really work. It was like this weird fantastical story when the railroad was involved, it made me think of Harry Potter or something like that, something magical as there is no way that would work in reality and no one would know it was there, but there wasn't actually much about the underground railroad in the story. It was mostly just Cora and her adventures trying to escape slavery told in a very impersonal way.  I never felt like I knew Cora or really cared about her even though she was in some bad situations. I mean logically I know it was terrible to be a slave, it should be easy to get me to sympathize with the character, but I didn't feel any more than I do when I hear someone I don't know passed away or something. I feel for the people who lost a loved one, but it doesn't personally affect me. Which is a shame, because this could have been a really great read.

Now this is the story of Cora and where she went when she tried to escape from the plantation where she was a slave. She goes from town to town and as I said I never really connected with her. I don't feel like I know her at all even though I just read a whole book of her story. It was more like she went places so the author could show what it was like in different areas at the time. Which is fine, but...it was missing something to make you really care. To make you connect with the story. It was slightly better than reading a history book that details what happened when and where.

Overall this was just an okay read. I wish it would have had more meat to it so I would have enjoyed it more. More character development and storyline, but alas it was not so. I didn't hate it, but it was nothing special.