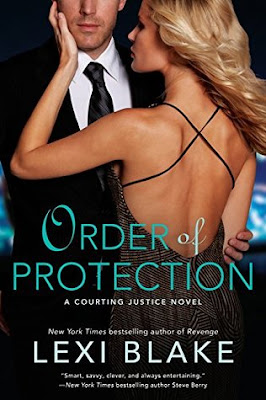 A sexy and suspenseful new contemporary romance from New York Times bestselling author Lexi Blake where love and law entwine for a conviction of the heart.

To high-end defense attorney Henry Garrison, Win Hughes is a woman he met during one of the most trying times of his life. She's soft and warm, and he finds solace in their brief relationship. But Win has a secret. She's actually Taylor Winston-Hughes—born to one of the wealthiest families in the country, orphaned as a child by a tragic accident. Win moves in the wealthiest circles, but her lavish lifestyle hides her pain.

When her best friend is murdered in the midst of a glittering New York gala, Win's charged with the crime, and the only person in the world she wants to see is Henry.

Henry is shocked at the true identity of his lover, but he can't reject the case. This trial could take his new firm into the stratosphere. Still, he's not getting burned by Win again. And yet every turn brings them closer together.

As the case takes a wild turn and Win's entire life is upended, she must look to the people she's closest to in order to find a killer. And Henry must decide between making his case and saving the woman he loves...

Order of Protection was a fun read. Not quite what I was expecting when I started it, but I really enjoyed it.

Henry is a lawyer, a very good, very ruthless lawyer. He was married to an actress and everyone knows what happened between them. All of the crazy stuff he went through with her and after that whole ordeal he wants to stay far away from the limelight. He never wants to be in that world again. He is also a recovering alcoholic and things are pretty stressful at the moment and he keeps thinking about taking just one drink...

Win is the only survivor of an accident that killed her rich parents. She is also a reality TV star, though she is trying to change that. She never wanted to be on reality TV, but she did with her friend and has an eating disorder to show for it. Though she is getting healthy again and is no longer starving herself for some control. She is taking some time to regroup before she starts her studies again.

When these two first meet Henry doesn't know who Win really is. He just sees this kind, caring, wonderful woman that he was determined to only have a short fling with, but once it is over wonders if it could become more. The two of them were so sweet together and that is what I wasn't expecting. I wasn't expecting them to be so warm and fuzzy when they first met, but I am glad they were. It worked for them.

Now when Win gets accused of murder and Henry shows up to help her out, oh I was not a big Henry fan. I mean he chose to keep working and helping Win even though he is super angry when he finds out who she was. He never wanted anything to do with that life ever again and even though she left the show, she is still in that world. These two had a lot of hurdles to climb before they could figure out if they wanted forever with each other. There is the fact of Win being set up for murder, Henry being angry for being lied to, and Win just trying to figure everything out. I loved the who done it aspect of the story and watching these two try and fight against the pull that is there for both of them. This was a really fun read.