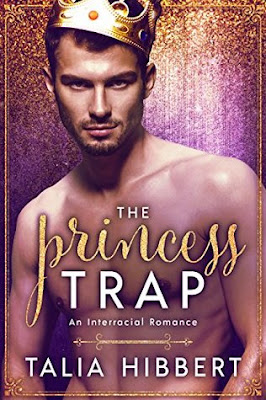 He’s reckless, dominant, and deliciously dirty. This prince is no fairytale.

Prince Ruben of Helgmøre knows exactly what he wants—and his current obsession is Cherry Neita. Everything from her rollercoaster curves to her fearsome attitude commands his attention.

And best of all? She has no idea who Ruben is.

Until the paparazzi catch them in a dark alley, her scarlet lipstick smudged, and his hands somewhere naughty…

All Cherry wanted was a night or two with the hottest man she’d ever seen. Turns out, that man is actually a prince, and now he needs her to play princess.

Well, princess-to-be. One year as his fake fiancée, and he’ll make all her problems disappear. Easy. Right?

The closer Cherry gets to Ruben, the brighter their passion burns. But the royal family hides dark secrets, and their palace is a diamond-studded trap.

Can true love bloom from false beginnings? Or will this fairytale end in a happy-never-after?

The Princess Trap is a steamy, standalone BWWM royal romance. Warning: this book is 70,000+ words of extreme pleasure and intense romance, ending in a HEA. NO cliffhangers and NO cheating. Enjoy responsibly!

I loved The Princess Trap. I have to admit going in I was a bit skeptical. One of the ladies chose it as a book club read which is really the only reason I picked it up. Boy am I glad she did! This story was so much fun and oh, I can't wait to read more from this author.

Cherry was so much fun to read. She is super fierce and doesn't need a man. She plays them like a fiddle all the time to get what she wants. She knows if she just throws some smiles around and pretends to be like they think she is then she will get what she wants. She is used to no one knowing when she is not being genuine. No one seeing through her smiles and wanting more. Only Ruben does. From the first moment he sees her he wants her and knows exactly what she is doing. It was no accident them running into each other, not like she pretended. She was there to check him out and he knows it.

Ruben is a prince, but Cherry didn't know that when they first met. She only knew he was super hot and was going to have some fun with him. Why not? He is interested. Only the paparazzi catch them and then things get interesting. Because Ruben has had some bad press recently he needs her to pretend to be his fiance. And he will pay her for it. No problem. She could really use the money so she accepts, but it not at all happy about it.

These two were so great together. I loved how Cherry stood up for herself and didn't just give in to others. Sure she agreed to be Ruben's fiance, but only pretend. She makes sure he knows that he messed up and there will never be anything more between them. She is so good t being so kind and warm and caring with people she likes but then turning to ice as soon as he tries to engage her in conversation. Oh, it was amazing to watch. Because she was amazing.

Now Ruben, oh I felt bad for him. Sure he should have told Cherry who he was, but they honestly were only together for maybe an hour or two before being found out. I can see why he would be a bit hesitant, but oh, he likes Cherry so much. He knows he messed up and is really upset with himself for doing that. For messing up something that could have been amazing. Reading him my heart went out to him for sure. Because you can see how he is really a good guy, but his family is a nightmare. How he had a really not good childhood and how he can still be so positive and nice is beyond me. Because he puts up with a lot. He has to. And now he lost Cherry because of what he did.

Only, of course, these two slowly start to fall for each other. At first Cherry is pretty angry, but when they start talking and actually getting to know each other it makes sense why things happened the way they did. These two are perfect for each other and I loved reading them. Oh, this was a great read. Though I do have lots of questions about monarchs and stuff now which I will have to research. Because I want to know what happened to some of the characters after those last scenes.