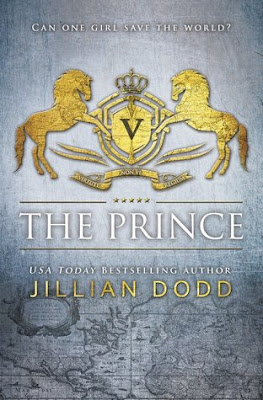 Can one girl save the world?

From USA Today bestselling author Jillian Dodd comes the first book in a sizzling series filled with action and adventure. Fans of The Selection and The Hunger Games will discover a heart-pounding thrill ride of espionage and suspense set in glittering high society.

An eighteen-year-old covert agent is pulled out of training before graduation by Black X, a espionage group so secret even the President of the United States doesn't know it exists.

For her first mission, she must go undercover as the long-lost daughter of a recently deceased billionaire, infiltrate high society, and protect the Prince of Montrovia from assassination. But Prince Lorenzo is known as the Playboy Prince for a reason and his sensuality and charisma add a whole other level of complication to her mission.

She knows that her every move is being watched, but what she doesn’t know is that the Prince is just a chess piece in a bigger game that will have world-wide ramifications. And that Blackwood Academy, the place she has called home for the past six years has secrets of its own.

I really enjoyed The Prince, much more than I thought I would. This story was like Gossip Girl with spies. Kind of that over the top super-rich not really believable yet love reading it kind of way. Because I didn't actually believe Huntley was a super spy and part of this super secret organization, but I loved the story regardless. She was still badass and saved the guy she was protecting so it worked.

Huntley is a spy on a mission. She and her "brother" are sent to Montrovia to make sure the prince doesn't get assassinated. At first it seems like it might just be a fluff assignment, but then people really are out to get him and it is a good thing Huntley is there. She keeps him from getting killed multiple times, but she has to play it off like she didn't really know what she was doing and is not trained to do things like this. It was fun.

Through it all Huntley grows closer to the Prince, but also to another guy she meets along the way. They are both super hot, but she is not supposed to get involved. This story had a lot of teenage drama, lots of hot men and women, lots of Gossip Girl-esque scenes. I loved it. If was over the top and a bit crazy, but that is why I enjoyed it. If it would have been toned down it wouldn't have been as much fun. I can't wait to see what fun adventures are in store for Huntley in the next book.