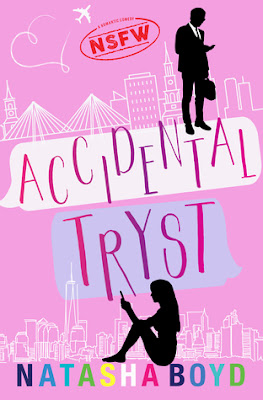 Emmy:
What a disaster! I only just made my flight to New York to help my uncle, and the phone I’m holding is not mine! It seems to belong to some commitment-phobic serial dater who’s never made it past four dates (according to the constant notifications he's getting from his fake dating profile...) And worse? I have a sinking feeling it’s that hot suit-monkey with the arctic grey eyes I just had a run-in with at the airport. Somehow I have to persuade him not to get a new phone until I get back. My whole life is on that phone. It’s only a few days. Surely we can handle it.

Trystan :
This is a joke, right? My life could not get more f*cked up. I’m in the middle of selling my company and on my way to a funeral and that hot mess hippie-chick stole my freaking phone. I’m not sure how she convinced me not to immediately walk into a smart phone store and get a new one, but now she’s going to have to play stand in and distract me while I deal with my long-avoided and estranged family. I don’t have my dating apps after all, and frankly she’s pretty funny. And sexy. And why can’t I stop texting her? And now we’re talking. And … look, I’ll admit that I usually run for the hills the morning after, but the morning after phone sex? That’s not really real, right?

Accidental Tryst was probably my favorite book I have read by this author, but that is not saying a lot as I am not a huge fan of her work. So why did I read this you ask? Because it was my book club pick. So I read it to discuss and it wasn't as bad as I thought it would be, but it was still just meh for me.

Emmy and Trystan accidentally switch phones at the airport and then start chatting and apparently fall in love. Now this book started off not so good - the way they accidentally switched phones. Do I need a spoiler alert for something that happens in the first pages? I don't know, but if you don't want to know how they end up with each other's phones don't read the rest of this paragraph. Okay so they are both charging their phone at the power outlets in the airport, they both leave their phone unattended (!!!) and then accidentally take the others when they go back to collect their things. Who does this? Like seriously who leaves their phone, or anything, unattended at the airport? I know when sitting next to someone traveling by themselves I have been asked to watch a bag for a min while they use the restroom or something, but you just leave your stuff out in the open at the airport? Nope. Not buying it. I really thought this would be one of those "run into each other, both drop your phone and accidentally pick up the wrong one" kind of situations. Oh well. It didn't get that much better from there for me.

So Emmy gets super duper lucky and is sitting next to a super genius hacker who can break into Trystan's phone for her and then the two start texting each other. I will say one good thing is their texts actually sounded like texts. But the real issue with this story for me is I never saw the connection between these two. All of a sudden they want to text each other more and are sad that they will have to return phones at some point and then never talk again. I didn't see it. They just texted normal stuff, then suddenly they are having phone sex. It didn't work for me.

So yeah, this was not the story for me. I don't care for the way the author writes her characters as I cannot connect with them. I don't feel/see the love so it is just meh.