Review: What You Need (Need You #1) by Lorelei James 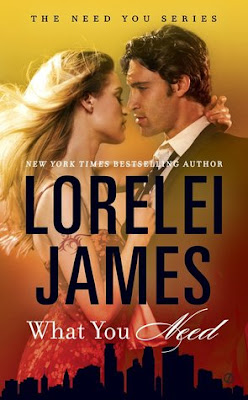 New York Times bestseller Lorelei James introduces a new family for readers to fall in love with in the Need You series. The Lund name is synonymous with wealth and power in Minneapolis-St. Paul. But the four Lund siblings will each discover true love takes a course of its own…

As the CFO of Lund Industries, Brady Lund is the poster child for responsibility. But eighty hour work weeks leave him little time for a life outside his corner office. His brothers stage an intervention and drag him to a seedy night club...where he sees her, the buttoned up blonde from the secretarial pool who's starred in his fantasies for months.

Lennox Greene is a woman with a rebellious past—which she carefully conceals beneath her conservative clothes. She knows flirting with her sexy, but aloof boss during working hours is a bad idea. So when Brady shows up at her favorite dive bar, sans his usual snappy suit, and catches her cutting loose, she throws caution aside and dares him to do the same.

After sparks fly, Brady finds keeping his hands off Lennox during office hours is harder than expected. While she makes him feel alive for the first time in years, a part of him wonders if she’s just using him to get ahead. And Lennox must figure out if Brady wants her for the accomplished woman she is—or the bad girl she was.

What You Need was...not what I needed. It was not a very good book. The characters were annoying, the plot was meh, most everything was not that great.

Lennox had a bad girl past, but she is trying to change her ways. She is trying not to do the same things she used to. She has a good job as a floater at a big corporation and is on the straight and narrow. Only she likes the CFO and he likes her. Only she doesn't know if he likes her for her or who she used to be. Because he is the uptight CFO.

So this story...I didn't mind Brady. I liked him well enough and who he was (he is more awkward than uptight, though he doesn't know how to have as much fun as he wants). My real issue with the story was Lennox. She annoyed the daylights out of me. She likes Brady, but treats him like crap constantly. And makes up lies to keep treating him like dirt and oh I didn't like her. One of the earlier scenes you see Brady come to her place and she opens the door before he could knock and says something like "hey, I was just going to ring your doorbell" and in her head she is all 'really?!?! THAT is all I get???? Hey?!?!' And bitches about it and it is just like seriously? Why are you so bent out of shape about this? He said hi, you treat him like garbage, you make up lies that you then need to get your friends to play along with to keep him from being with you even though you like him, what is your deal??? I really hated her. So so much. She was soooo annoying. And irrational. And ridiculous not in a good way. And stubborn. Like one day she had a huge migraine at work and they were telling her she should go home, but she refused. Really? Why? Have you ever had a bad migraine? Working is sooooo not fun. Take the time and rest. But okay, whatever. Then she was asked if she took anything for her migraine, which you would assume she did. Because why would you just suffer to suffer? But nope. She is way too stubborn to even take a Tylenol or something for her splitting headache. Much better to just be a jerk to everyone because you are two and can't be an adult. Urgh! So frustrating!! She takes her stubbornness WAY too far!! I hated her.

Now there is one thing I did like about this story - the fact that there wasn't a no fraternization policy so it was okay of Brady and Lennox dated. I liked that that didn't add more unecessary drama. But that is about it. Besides Brady being okay. Oh, this so wasn't the book for me.