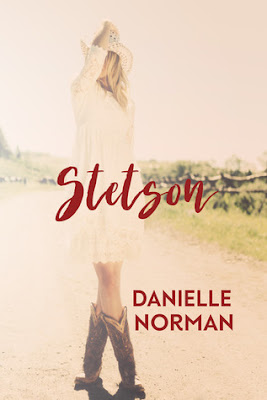 The only thing fancy about London Kelly was her name.
She was a jeans and boots kind of girl.
Her perfume was the smell of hay.
And her days were spent in the saddle.
Except for a few bumps in the road she had a pretty good life.

Until…
Her dad died.
Now, she’s left running the family cattle ranch and horse stables.
The sexy sheriff has decided that he wants more than a one night stand.
And her employees believe that she has no business running a ranch.

Stetson was one of those books that pleasantly surprised me with how much I enjoyed it. Reading the synopsis I was just meh on the whole thing, but it was fun.

London is running the family ranch after her father died, but she is hitting a few bumps. Things keep happening and it is starting to look like someone is out to get her. That plus her one ranch hand who is not exactly listening to what he tells him as he thinks she is just a girl and he knows best and it is not going that well for her.

Add in the sheriff, Braden, who keeps coming out and who definitely wants more than a fling and things are a bit complicated. I loved these two together. Braden is there for her whenever she needs him, though she is capable of handling most things on her own. He is the law though and he supports her and loves that she is strong and capable. They were really cute together and even though it was fairly obvious from the start what was going on with the mysterious things at the ranch, I still enjoyed it. And the creepy ranch hand was super creepy in a great way. He made me very uncomfortable, but that is what he was supposed to be. Overall a really great read.