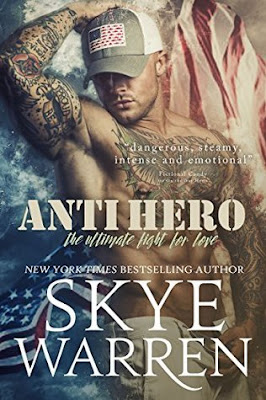 Nate Gaines used to think he was fighting for freedom. Then his team died in a fiery betrayal and he realized corruption went all the way to the top. He was no hero. Not anymore.

Not working for the highest bidder. A mercenary.

And the girl he loved? She was better off without him.

Until she became a target. He'd protect her. He would kill for her. He just couldn't let himself fall for her again. That would be dangerous for both of them.

WARNING: Contains an inked military man, a plucky reporter on a mission, and explosive chemistry!

ANTI HERO is a full-length standalone novel with plenty of heat and suspense. For a limited time only, includes the scorching military romance ON THE WAY HOME as a free bonus book!

Anti Hero was...okay. It wasn't amazing, it wasn't the worst book I have read, it was just...meh. Both of the characters are supposed to have these horrible backstories, but I didn't really see it. Like I was told what it was but didn't believe these characters actually went through that.

Sofia was also kind of annoying. I know she is trying to be a badass journalist and do whatever she wants, but um maybe use your head for two seconds so you don't get yourself killed? Like she wants to get her story and is not willing to think before she puts herself in harm's way. Like facing off with a bad guy when he has tried to kill you before, but now it is in the open so he can't do anything right? Cause bad guys always play within the rules. The way she went about doing her job was not very smart and it annoyed me. Because there were better, safer, ways to accomplish the same thing.

Overall this was a meh story. The characters were meh, the story itself was meh, it was just not that good. Oh well, it was a quick read.