Review: Out of Nowhere (Middle of Somewhere #2) by Roan Parrish 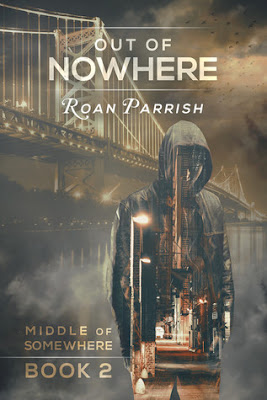 The only thing in Colin Mulligan’s life that makes sense is taking cars apart and putting them back together. In the auto shop where he works with his father and brothers, he tries to get through the day without having a panic attack or flying into a rage. Drinking helps. So do running and lifting weights until he can hardly stand. But none of it can change the fact that he’s gay, a secret he has kept from everyone.

Rafael Guerrera has found ways to live with the past he’s ashamed of. He’s dedicated his life to social justice work and to helping youth who, like him, had very little growing up. He has no time for love. Hell, he barely has time for himself. Somehow, everything about miserable, self-destructive Colin cries out to him. But down that path lie the troubles Rafe has worked so hard to leave behind. And as their relationship intensifies, Rafe and Colin are forced to dredge up secrets that both men would prefer to stay buried.

Out of Nowhere was an interesting read. It took me a really long time to not hate Colin after what you see of him in the first book, In the Middle of Somewhere. I loved Daniel so so much and I did give myself a little bit of time between the two books, but this author is so amazing I couldn't hold off enough to forget how much I hated Colin in the first book. They are stand-alone stories, you don't have to read them in order, but if you have read In the Middle of Somewhere then they do take place during the same timeframe so you will know some major events that happen.

Colin was an interesting read. You know that quote everyone is the hero of their own story? That is what I thought of a lot while reading this book. Colin doesn't think he is a horrible person, doesn't think the things he did to Daniel were as bad as they were. He is trying his hardest to repress who he is and be someone his dad would be proud of. He is attracted to men, but he doesn't want to be. He hates himself for that and anytime he acts on that attraction he is disgusted with himself. He is a self-hating gay man and has a lot of anger issues and just issues in general. He doesn't mind being beaten up because the pain gives him something else to focus on. He is a mess.

Rafael was wonderful. So sweet and kind and trying to help others any way he can. He knows what it is like to be stereotyped just because of something that happened in his past and the way he used to be. He has changed, but that is not always enough to have everything work out. It is difficult to rebuild your life after getting in with the wrong people when you are young. But he tries. He volunteers for some great organizations and really opens Colin's eyes to a lot of things, such as the injustices of the legal system in the US. I loved how this all was handles. How Colin has typical thoughts about how if you are in jail you deserve it and doesn't really know how messed up it all is. Rafale is a wonderful person, so patient and kind to Colin, always helping him understand and have a different outlook on the world. He was wonderful.

Now as I said Colin is really messed up. He is deeply flawed and I really didn't like him when I started the book. I couldn't stop thinking about all the things he said and did to Daniel who is openly gay and whom he is deep down jealous of. Daniel who is living as an openly gay man, something Colin doesn't think he will ever be able to do. Only Rafael steps into the picture and suddenly he is trying to figure out how to be with him, but still keep his family in the dark. I loved reading how he thought about different situations and the things he has done, even though at first I would get super angry with him. Because I knew Daniel, because I read his story first, it was difficult to have sympathy for this character who was so hurtful and mean. I understood his reasons and why he was acting out, but that doesn't make it right. So I wasn't sure if I would be on board with Colin by the end of the story, but somehow the author got me there. The author got me to where I loved him and wanted nothing but good things for him. Wanted him to figure everything out and fix his relationship with Daniel and just be happy. This story was fantastic especially because I did love Colin by the end. I hated him at the start, even partway through I still did, so that is quite the accomplishment. I love the way this author writes a story. Everything I have read of hers has been amazing and I can't wait to read more!