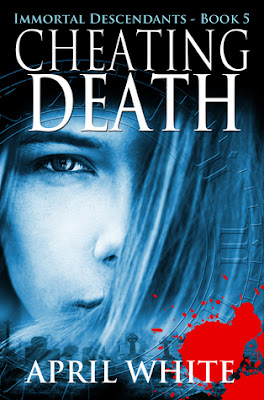 In the thrilling conclusion to The Immortal Descendants series, a life has ended, the future is lost, and a war has just begun.


An explosion has split Time and Archer has paid the ultimate price, leaving Saira heartbroken and desperate to repair the rupture. But the blast has trapped Saira in an alternate future where Mongers are cornered predators and Death is the ultimate judge. If Saira and her larcenous friend, Ringo, ever want to see Archer alive, they must pull off the impossible – alter history at a moment in time to which they cannot return. But saving Archer will restore a timeline where Mongers have complete control, mixed bloods are hunted prey, and the Descendant world is spiraling into chaos.

As Saira uses her Clocking skills to prevent her worst nightmares from coming true, she travels from the dirty streets of Victorian London to the secret archives of the Vatican. She seeks a purpose that is greater than smashed hope, greater than lost love, greater than the prophecy that has shaped her very existence. She must use the lessons of history to free the present and shape the future. And in the end, Saira and her friends will face War and Death in the most important battle of all – the one for Peace.

Does anyone else do that thing where you are super excited to read the last book in a series, can't wait to see what happens, but also don't want to read it because you don't want it to end? I put off reading this book forever because...well because once I read it it would be over. No more first time experiencing this story and I wasn't ready to let these characters go. I love the history and adventures they were on and didn't want them to end.

I knew Cheating Death might be a tricky one for me because you had a time spilt at the end of the last book. Saira and Ringo are stuck in the wrong timeline and really I often times have an issue with time travel as it doesn't make sense the way a lot of people use it. Since I liked the way the author deals with it in prior books I was curious to see what would happen in this one. And I loved the way the author dealt with it! I loved everything that happened. It was wonderful. Well tense at times and their lives are a  bit of a mess, but I really enjoyed reading this one.

Saira and Ringo trying to fix the time split with an angry Tom it was quite the adventure. With the whole not being able to go to a time where you already exist Saira had to figure out a way to actually fix the time split. She couldn't just go back to when she was as that wouldn't work. Plus her worry about Archer and if he is still alive doesn't help matters. I did enjoy seeing the other timeline and what the present is like when some things are changed. How some people can change if in different situations. My one issue with this last book, specifically Saira, Ringo and Tom's storyline? I wanted more from the character they met along their journey. More of Mary, more of an impact on the storyline than just a side character. I love in some of the prior books getting to know various historical figures as they were key to the plot. But this one was more about Saira and crew and the immortals and they happened to come across various people who didn't affect the story as much. It was fun, I just wanted more! Because the author weaves history and people into her books in ways I love (and I am usually not a history person. I would usually skim histories, but these were too much fun). Really I wanted more Mary and adventures with her.

Now while Saira is doing this Archer is dealing with his own things in the correct timeline. Mongers are still trying to take all the power and get the mixed bloods, but he has some bigger issues to worry about as well. I don't want to spoil anything, but man. These characters go through a lot in a short amount of time. I was reminded that these books don't take place over many years, it was only a year ago that Saira learned she was a clocker and then everything that follows. That is crazy! So much in such a short amount of time.

Overall this was a really great read. But really if you made it this far into the serious you wouldn't expect any less.