Review: Until You (Bachelor Brotherhood #2) by Denise Grover Swank 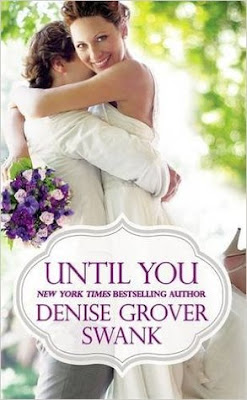 Never settle down. Ever.

Workaholic Lanie Rogers lives a completely nomadic lifestyle. Her job keeps her on the move, and relationships are a complication she doesn't need. That is, until she meets Mr. Tall, Dark, and Hotness at a pre-wedding party. Complicated? Maybe. But lately, Lanie's life has been missing a little something---and sexy playboy Tyler Norris offers something she definitely can't refuse.

Tyler has always been a little too popular with women for his own good. Ever since he and his buddies vowed to remain bachelors, Tyler figured he was safe from temptation. Lanie and her gorgeous brown eyes are about to prove him so, so wrong. With one kiss, the heat is intense. After one night, it's pure combustion. It was supposed to be a no-strings fling---until these two commitment-phobes each discover the one undeniable exception to their rule.

Until You was just an okay read for me. I really enjoyed the original series, I really liked the first book in this series, but this one? Not so much. Things started off well, I was enjoying it, but then it kind of fell apart for me.

Tyler doesn't want to ever settle down. He is trying to change his ways and not be such a ladies man. He was fine until he sees a mystery woman at a pre-wedding party. He doesn't know who she is, but she intrigues him.

Lanie is a workaholic and moves around a lot for her job. She doesn't really have many relationships. She used to be close to her cousin, but because of work not so much anymore. She thought she was happy, but this whole wedding thing (the cousin is getting married) is making her start to re-think some things. Spending time with her cousin, meeting Tyler, the mysterious guy she meets at a pre-wedding party, all of it is making her re-think her life goals. Is her job really worth being alone?

These two had super chemistry which they couldn't deny. Neither wants anything permanent so once they decide to give into their chemistry it should be perfect right? After all Lanie is leaving in a few weeks so there is an end date in sight.

Now this beginning part I really enjoyed. Them meeting, them not knowing who each other was, the fun ways they kept running into each other, the start of their relationship. Then suddenly Tyler was professing his love and Lanie was right there with him and I was like wait what? How did we get here. I don't know why but I didn't see it. At least not at the time. And then everything kind of went downhill a bit from there. Things moved quickly and they had some big obstacles in their way to happily ever after, but none of it felt like it should have really been an obstacle. *Small spoiler alert* Like Lanie said she looked for a job for a few weeks, didn't find anything so she has to move to get a job. I don't know. It was like you can't take some time and figure things out first? I...I didn't really understand. That and everything magically working out at the end did make me roll my eyes a bit. It was a bit too contrived for me. I know it should have been fun and cute, but because I wasn't enjoying it it was just meh for me. So yeah. This was an alright read, but not as good as others by this author.