The Gambler (The Wedding Pact #3) by Denise Grover Swank 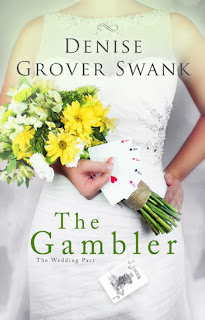 Libby St. Clair believes in fate—so much so, she’s willing to pin everything on a curse a fortune teller placed on her and her two best friends when they were kids. The curse, that each of them will marry before thirty, have a disaster of a wedding, and end up with a man other than her original fiancé, has come to fruition for both of her friends, who are now deliriously happy. But Libby’s attempt to quick-start the curse by proposing to her wrong-for-her boyfriend ends in a wild dash from the altar. She’s rescued by her friend Noah, the only person who understands her impulsive decisions--because he’s the same way.

Having spent most of his adulthood fleeing responsibility and commitment, Noah McMillan is finally ready to grow up. Of course, figuring out how is still a work in progress. When he realizes he’s in love with Libby, he flies to Kansas City to put a stop to her wedding. But Libby’s already pulled a runaway bride. Eager to cheer her up and prove that he can be the man she deserves, he takes her on a madcap car trip that will bring them all the way to the City of Sin.

In Vegas, those who risk it all either win big or lose everything, so what will happen if Libby and Noah take a gamble on love?

I loved The Gambler. It is probably my favorite of the series. I loved Libby already, she is awesome, and I couldn't wait to see her and Noah figure everything out.

Libby believes in magic. She is the only one of the three friends that really truly believed in the curse. The curse that says she will plan a wedding, it will be a disaster, and she will end up with someone other than her original fiance. Before she is thirty. She believes it so much that as her thirtieth birthday draws closer she arranges a wedding to a man she doesn't love so that her true love will swoop in and save her. This worked for both of her friends so why isn't it working for her? She finally has to run out of her own wedding straight into Noah, her best friend. The guy who she first met when his brother married her best friend. The guy who she has been talking to a lot since then. The guy who she is growing closer and closer to, but thinks nothing of it.

Noah was always the screw up in his family. He never really cared about that, but now he wants to make something of himself He want to show his brother he can count on him. Oh, my heart broke for Noah at times. He is really trying, really putting himself out there, but other people don't see it. Everyone that is except Libby who is kind of seen the same way by her friends as Noah is by his family.

Now I have to say Libby's friends made me very angry in this story. Libby was always there for them when they needed it, but were they there to support her? No. No, they were not. Good thing she has Noah. Noah who saved her. Noah who she is really falling for. Noah her friend.

This story was really sweet. It was still fun and entertaining like the other two, but I really wanted the two of them to figure this out and live happily ever after. I loved them both so much and they really deserved it. They both struggle with being taken seriously, but both are there for the other no matter what. It was so sweet watching them fall in love. I loved that they started as friends who turned into something more. That they both helped the other be a better person and do what they wanted to do. They always had each others back which they needed it at times. This story was so much fun and made me so happy.