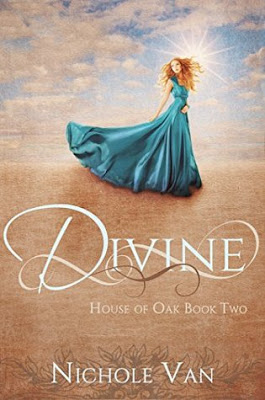 Time is a vast cosmic sea, where each life exists as rippling circles on its surface, past and future being eternally present. And occasionally, one expanding ring tangles with that of another, linking two lives together even though separated by centuries...

Georgiana Knight--born in the nineteenth century, but now living in 2013--has certain standards when it comes to mysteries: they must involve blood curdling threats, late-night rendezvous and the terror of Imminent Danger. So far, her current mystery has been a terrible disappointment. No ghosts, no dastardly villains, not even an actual murder weapon. Just a suspicious symbol, a drawing of a bloody dagger, and an old love letter. Though the centuries-old love letter is written in her own handwriting, so that's something, right? And there is a time portal in her cellar. Should she risk giving up hot showers and return to the past to discover the mysterious stranger who inspired (will inspire?) her passionate letter?

In 1813, Sebastian Carew has his own mystery to solve. As a teenager, he fell madly in love with his childhood friend, Georgiana. Ten years later, he returns from fighting abroad as an eligible man of fortune who must marry. And soon. He is determined to fend off fortune-hunting women, find Georgiana and win her affections. However, she has utterly vanished. Can he divine the truth of her disappearance and convince her to marry him before time runs out?

I really enjoyed Divine. It felt like the story and writing and everything was tightened up a bit from the first book. Not that I didn't enjoy book one, but this one felt a bit cleaner. It was a lot of fun.

Georgina is currently in 2013. She was brought through a time portal at the end of the first book to cure her of an illness that would have killed her in her own time. She was so much fun even though she could be a bit dense and silly at times. She loves a good mystery so when she finds a love letter from the past written in her own handwriting what is she to do? She can't just ignore that! She must go investigate!

Sebastian has always loved Georgina, but he had to make something of himself before he could come back and ask for her hand. Now he has, and he has to get married quickly, so he is trying to track her down. Only problem? She seems to have disappeared.

These two were so much fun to read. I loved how Seb loved Georgie. They were both so silly in the best of ways.

"How was she to live without someone to keep track of her toes? She was completely toe-irresponsible."

He was always there for her wanting to take care of her and keep her safe. Not that she needed it, but it was really sweet. And Georgie was strong and independent and took forever to realize that she was in love with Seb as well, but that was okay. Through it all there is a mystry of who is Lord Zeus and what is really going on. Georgina has a tendency to get a bit carried away, but I loved that she could reel it back in and think rationally when needed. Seb and Georgie, oh how much fun they were to read. I loved watching the two of them fall in love and work everything out. Now on to book 3!