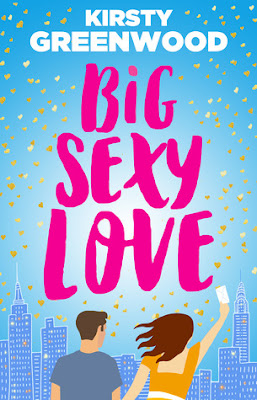 Olive Brewster is a scaredy cat. She doesn't do new or risky. She’s happy enough with her job at the local market, it’s cool that she has no boyfriend to fret over, she even likes that she still lives in her childhood home. No drama, no fuss, no problems. Everything is fine. Super duper fine.

Except … Olive's best friend in the world , Birdie, is dying.

Birdie has one final wish. She wants to track down her first love, Chuck, and because she's stuck in the hospital she needs Olive's help to do it. But there’s a teeny problem: Chuck is somewhere in New York and Olive has never even left her home town, let alone roamed the crazy streets of Manhattan.

As if the big city isn't scary enough, Olive has to contend with Seth, a cocky comedy TV writer who thinks she’s a joke; Anders, a bored socialite who’s taken a shine to her; and the fact that no matter how hard she tries to track down Chuck, he doesn't seem to want to be found.

Can Olive learn to overcome her fears, abandon her old safe routine and fulfil her best friend’s last wish? It's going to take extra bravery, one badass attitude and a whole lot of big sexy love to make this happen …

Big Sexy Love was a big, not-so-sexy, mess. At least for me. Now it seems like every time I write a review for a comedy I am saying the same thing. I usually don't read them because it is not usually my sense of humor. And that is true in this case, but that is not why I disliked the book so much. Well at least not the whole reason why. Really I found this story to be tedious and not realistic and that was my main issue. I like comedy, but it has to be something that could actually happen. This so wasn't the book for me and I only made it to the end because it was a book club read. I had to finish so I could discuss.

Olive doesn't like new things. She has her routine and even if occasionally something comes up that she might want to do different, she doesn't. She can't break that routine. She is afraid of everything, afraid of new, so she keeps to what she knows. She has never really even left her hometown. She still lives in the house she lived in growing up. She doesn't like change.

Only her best friend is dying and wants her to go to NYC to deliver a letter to a guy she used to date. A guy who her bff claims is her big sexy love (I really dislike this term. I am not completely sure why, but it being the title made me think this book was going to be completelty different than it was. The sexy throws me, but I digress). So what does Olive do? Heads off to NYC. Now this is where the real issues started for me. That Olive is so afraid of new things, so afraid of branching out and doing something different, and yes she has a hard time getting on the plane and flying to NYC, but once she is there she seems pretty fine. Like way more fine than a character who I was told hated change and disorder should be. It was like that wasn't an issue anymore in New York City. One of the biggest cities, fast paced, so many people and things everywhere. But Olive was fine. Which didn't make sense. But not even my biggest complaint about the book. No my biggest complaint was that the author seemed to change reality so that she could make the wacky zany things happen. So that she could make a joke. And that just left me constantly like really? No, this isn't how x works! There is no way y could happen like this! So it drew me completely out of the story.

While reading this story it made me think of The Unbreakable Kimmy Schmidt show. I really enjoyed that show, but even though it is over the top and wacky, it could happen. While it might not be likely, maybe never has happened, I could see that it could. Like was someone locked in a bunker underground for years? Not to my knowledge, but it could happen. But this story? There were so many things that just could not happen. Like Olive accidentally puts the letter she is supposed to deliver to the guy in a mailbox on the sidewalk. So she reaches into the mailbox and shuffles things around trying to find her letter. But here's the thing, and someone please correct me if I'm wrong, but that is impossible. You literally cannot put your hand in the mailbox and grab letters. Maybe if this were back in the day, but they changed mailboxes so that you couldn't steal mail. So...it was added to the story to make another zany adventure, but it literally couldn't happen because you can't grab letters from mailboxes. When things like this kept happening it made it really difficult for me to read. Because if it can't happen then it is not believable and I am just not a fan. So yeah.

The other big issue I had is that *spoiler alert* Olive never fessed up to not having a fiance! Seth thought she had a fiance, was falling for her, they even had sexy times and she still didn't say anything! Really she was falling for him, but instead of doing anything she was just like welp, I guess that is that. Time to go home to my boring life I am realizing I might not like that much and forget about doing anything to even try and be happy with Seth because...well then I would have to do something. It was bad. I didn't like it. Really I don't know why she didn't tell Seth right away after the flight that she wasn't engaged. Because there was no reason to keep up the false pretenses. And I don't like that she was willing to let Seth think that she was cheating on her fiance with him. Because that is just not cool.

So yeah, this was definitely not the book for me. All of the things that couldn't happen, or wouldn't happen (like everyone in a cafe would stare at you in NYC when you walk in because of some sketch comedy show the night prior is a bit ridiculous. I mean no one cares about you in NYC. You could walk down the street naked and no one would give you a second glance. There is a reason movie stars live there), plus not actually liking the main character made it not good for me.