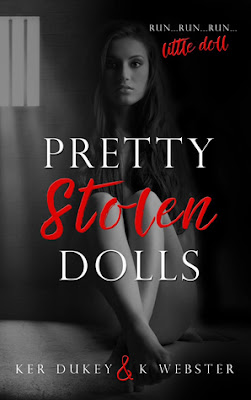 
This is a Dark title with adult themes

Benny loves his pretty little dolls.
As long as they do exactly as they're told.
He keeps them perfect by brushing their hair
and gives them pretty dresses to wear.
He likes to toy with them late at night.
One so timid but the other likes to fight.
When his favorite doll runs away...
despite the other doll promising to stay,
his heart becomes broken and he can't help but cry.
He wants her back home or his pretty little doll must die.

Have you ever had to make a decision that haunts you every single day for the rest of your life…the life you stole back?
I have.
I ran for my survival, rocks and twigs cutting into the soles of my feet, my lungs burning and screaming for rest, every muscle tensed and fighting along with me for existence.
I left her.
I ran, ran, ran—from Benny and his lone, pretty little doll—until I couldn’t remember where to find them again.
I’m sorry.

Pretty Stolen Dolls was...not my favorite read. It seems like everyone loved this story, but I am not sure why. The characters, the story, everything was a bit blah and/or not realistic. Oh well. *Note: some slight spoilers ahead*

Jade and her sister were kidnapped when they were kids. For four years she was held by Benny in a basement somewhere and terrible things happened. She was able to escape, but can't remember where she came from. Her sister is still there and she hasn't been able to find her and save her. So now it is years later and Jade is a police officer who is still obsessed with finding Benny and her sister. She lives with her boyfriend who was the boy next door and has been there for her since she escaped. He is kind and caring and supportive even when she is a bit crazy obsessed, but he loves her. And she doesn't love him. Though she thinks she should.

So Jade. She is the main character and she didn't read like a real person to me. She obviously has issues, who wouldn't if they went through what she went through? But...how did she become a cop? She really doesn't seem fit to be one. I get that she wants to catch the bad guys and save people like her sister, but...she didn't seem real. Like how could she just do whatever she wanted as a cop? That is not really how cops work. She was way too messed up in the head to be working with guns. Plus I...I didn't like her. I didn't care for how she switched from one thing to the other so quickly. Like she had a boyfriend, but then they broke up in a crazy fight. So then she is working with her partner who up until now she has found disgusting and didn't like at all, but suddenly he is so hot and her soul mate. It was like wait what? I didn't get it. How did she just do a total 180? The whole story was kind of like that. Things suddenly happening and it didn't make much sense.

This story itself was just so so for me and it felt a bit...blah. I love dark reads, I love horror, this should have been right up my alley, but it was not that good. The story felt like it lacked something. I couldn't connect to the characters or what happened and it was all too quick and easy. Oh well. It did end on a cliffhanger, but I didn't enjoy it enough to read on and see what happens.