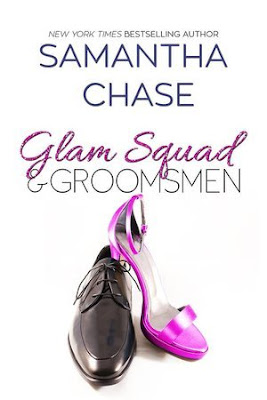 Dressing up as a bride once a week is all fun and games until you come face to face with your ex.

Penny Blake loves her job with Enchanted Bridal. She gets to model wedding gowns and help brides plan for their big day. And yet…she’s wanting a little more. Besides wishing for her own happily ever after, she has big dreams of making her own contribution to the business in the form of her own glam squad. Her bosses all think it’s a great idea, but right now she’s needed in other ways – like helping out with the groomsmen.

Was there any greater form of torture than having to help your sister plan her wedding?

That’s what Spencer Buchanan is facing and although he goes into it with a bit of an attitude, running into the girl who got away – three times! – suddenly made this whole wedding planning thing a lot more bearable. Moving back home was never part of his plan, but once Spencer sees Penny again, all bets are off. And having her help him with his fittings on his tux turn into his favorite pastime ever!

Glam Squad & Groomsmen was a cute read. Penny and Spencer grew up together and liked each other, they even had a pretend wedding when they were really young, but things didn't work out the way they planned. They dated, but Spencer broke Penny's heart on more than one occasion. And it really hurt her. The things he said, why he broke things off, upset Penny a great deal.

Spencer has always thought that Penny was the one for him, but it hasn't worked out in the past. Now that he has seen her again though, he is helping his sister plan her wedding and Penny just happens to work at Enchanted Bridal, he can't help but wonder if he can recapture what he has always wanted. If he can get her to give him another chance at happiness.

It wasn't easy with these two. Penny has been burned too much in the past to just let Spencer in again no matter how much she might want to. Because she is not sure she can trust him to not hurt her again. To not leave her again. And this time it would really devastate her. Penny was super sweet and kind, but she does have a bit too much pride at times. She has dreams and things she would like to accomplish and she thinks people see her as not so smart. Not good enough. But she loves what she does and she has great ideas. If only she could come up with a way to make her dreams a reality.

Spencer was really sweet as well. Sure he messed up in the past, but he was only a kid. They both were. He still messes up a bit now, but he only tries to do what Penny wants. Because he cares about her so much he just wants her to be happy. It doesn't help that they don't live in the same town, or the same area even, so things are a bit tricky. They were cute together and I enjoyed watching them try and figure out how to make things work this time.