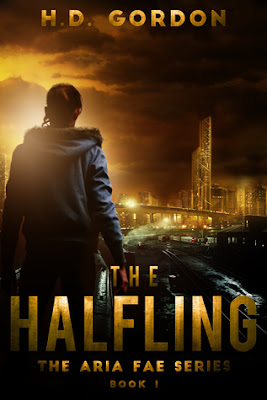 When Aria Fae gets cast out of the Peace Brokers, a secret supernatural organization that’s trained her since infancy, and is left to fend for herself in the human world, she finds herself in Grant City, intent on attempting a normal human life.

As a Halfling, Aria has abilities that are a little underused in the flower shop she lands a job at. And when her new friend Samantha Shy enlists Aria to help investigate her mother’s death, the two girls decide to become vigilantes.

A new drug called Black Magic is running rampant in the streets of Grant City, turning people into supercharged maniacs. With Sam’s mad computer skills, and Aria’s Faevian abilities, they may be just the heroes Grant City is in need of.

Or they may find out they’re in way over their heads, and their mutual crush on the same guy is the least of their worries.

The Halfling was a fun book. I loved getting to know Aria, Sam and all the characters in this story. If you know the authors other works you might have met Aria already and see some familiar faces in this book. Eeek!

Aria Fae is a halfling. Half fae half human. She used to work for an organization that straddled both worlds, trying to keep everything in check, but she has been kicked out and left to fend for herself in the human world. She has been floating and just moved to Grant City to start over again. She tries to keep to herself, but she just can't help stepping in when someone needs help. She finds herself making a few friends and just starts to settle into her life there. Sure it is not the most normal life, but she is not a normal human. Oh it was a fun read.

I must say the beginning was a bit slow, but once Aria becomes friends with Sam and they start doing their super hero thing I just loved it. Like I said above Aria just can't sit back and not help someone in need. When she starts to help fight crime and comes across a really bad situation it gets a bit intense. There is a new drug on the streets, a drug that makes people a bit crazy, and is really not good. The new drug is starting to spread through the streets and when Aria finds there is more to this drug than it seems she must try and stop it. With Sam and Matt on her team helping her fight the bad guys in Grant City she thinks she has everything under control. Of course it is not that easy, but it is fun. The bad guys were pretty awesome. At least those we met. I loved watching Aria come into her own and try and deal with everything. They didn't make it easy and I can't wait to see what happens next. I'm curious as to who the head bad guy is, the one really in control of everything.

Through it all there are a few other characters that pop up, and I am curious to see where the story goes with them. Especially the neighbor. He has a story I am sure and I can't wait to see what happens with him. So yeah. This book was a fun read. Aria and crew are trying to fight crime and help save the city, they start to figure out what is going on, but they only get the tip of the iceberg.