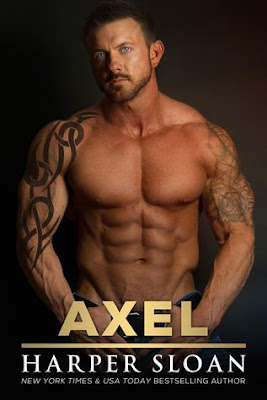 Fate hasn’t always been friends with Isabelle West. In fact, fate has been a downright bitch.

Isabelle has learned the hard way how hard life can be when fate isn’t by your side. It can hand you dreams on silver platters, but it can snatch them right back and hand you nightmares. One thing Isabelle knew for sure fate was consistent with was taking away everything she ever loved.

For the last two years Isabelle has been slowly clearing the clouds of her past. Happiness is finally on the horizon. She has a thriving business, great friends, and her life back. All she has to do is jump over the last hurdle…her ex-husband.

When problems start causing her to fear her new life, and memories that are better left forgotten start rushing to the surface the last thing she needs is a ghost from her past to come knocking on her door.

Axel never thought he would look into the eyes of Isabelle West again, and he wasn’t sure he wanted to now. He’s carried his anger for so long he isn’t sure he can just turn it off, but when he is faced with protecting her and an unexpected desire to have her again, life gets a little more complicated.

How will Axel and Isabelle deal when all their cards are put on the table and everything they thought was true blows up in their faces?

Axel was a fun read. It was one of those books that I should have hated, that the main character should have annoyed the heck out of me, but I didn't. It is just the difference that is the author. She made me care about the characters even though I would normally find them annoying. It was great.

Isabelle and Axel were in love. From the moment they met it was just right between them. Yes, they were young, but they planned a future together. Only Axel went off and joined the military, which Isabelle supported 100%, but he never returned for her. She was devastated, thinking he was gone for good and she would never be able to see him again.

Axel missed Isabelle so much, but when he returned for her she wasn't there. Some other things had happened and she had to move, but no one could tell him where to. He spent years searching for her only to find her married. He thought she had moved on, that she was happy, so he tried to let it be. Tried to let her live her life. He still loves her even if he is very angry with her for leaving him without a word. It was really just a big case of wires getting crossed and people keeping information from them. It was one of those if they would just talk they would figure everything out and they could try again. Only Isabelle refuses to talk to him. She is one of those people that just hides from what is happening instead of facing it.

After she thought Axel was gone for good Isabelle tried to move on. She thought she had found someone who she could be happy with. Not like Axel, but since he is no more someone she could spend her life with. Only her happily ever after turned into a nightmare when her soon to be ex started hitting her. She put up with it for a long time until things finally went too far and he left her passed out on the floor. She finally was able to escape with her bestie, but it has been hard putting the pieces of her life back together again. Thankfully she has great friends who are there for her no matter what.

When her soon to be ex starts getting a bit creepy, when they realize he knows where she is, Isabelle's friends make her agree to try and do something about it. To get more security and whatever needs to happen to keep her safe. Her one friend, Greg, especially is determined to keep her safe. Greg who knows/works with Axel, but doesn't know he does since he doesn't go by that name anymore. Greg who won't let Izzy just crawl inside herself again. Greg who will do anything to help her.

Izzy is why I was so surprised that I enjoyed this book as much as I did. I normally hate girls who are so stupid and just run. She refused to even talk to Axel about anything but her ex situation for so long! It was very frustrating. She wouldn't listen to anyone and just was aggravating. She would just be a little brat all the time. She would throw temper tantrums and it was just a lot of things I usually hate, but I didn't. Yes I would yell at her at times, but I still liked reading her story. I was still rooting for her even though she was the one standing in the way of her own happiness for so long. Still a great read and I can't wait to read everyone else's story!