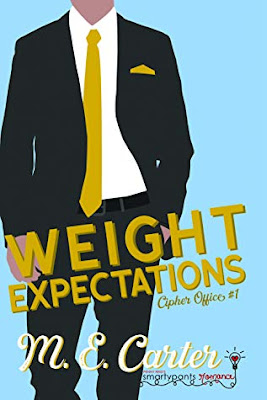 Rian Thompson thought she joined the gym to get healthy. Little did she know she was about to add hundred and ninety pounds of swoonworthy abdominal muscles and arrogance to her life.

Every day in Rians’s life follows a predictable pattern, and she wouldn’t have it any other way. She’s got a nice job, a nice place to live, and a nice family – even if they are a little wedding-zilla-ish at the moment.

She doesn’t need anything spectacular to be happy. She just needs to get healthy – mentally, physically. . . and maybe spiritually if that happens. But she’ll settle for two out of three until her sister finally gets hitched.

Carlos Davies thought his life was perfect. Little did he know it was about to be turned upside down by a woman who is not his type.

In Carlos’s mind, his life is damn near perfect. He’s got a great job, a great place to live, and a great stash of pick up lines that always work. It has occurred to him that maybe no one actually takes him all that seriously. But with these bulging biceps and thick, dark hair, does that even matter since he’s never sleeping alone?

I have been reading and loving these Pennyverse stories so I was pretty excited to start reading Weight Expectations. I also enjoyed the other books from this author I have read so I thought win win win for me! Only...this story was not as good as I was hoping it would be. I started reading and could easily put it down to do other things when needed. So...not as engaging as I had hoped.

Now why was it just okay? The characters were...I liked Rian. I did. She was smart and funny and sarcastic and all the things I love. She has been told that she is morbidly obese and has to start changing her ways so she is trying to eat healthier and exercise more. Now we get to see a lot of her exercise routine which sounds like it should be boring, but it was more fun than expected. Why? Her trainer Abel! The two of them together were so much fun to read! If this story would have only been from Rian's point of view I would have said that Abel was her love interest. Because the two of them get along so well and were so much better to read to read. Really I think I just liked Abel as he was awesome, but he is not the love interest. Carlos is. Carlos who works for Cipher Security. Carlos who does not want a relationship, only wants to sleep with stupid, hot ladies as if they have a brain they are not his type. Ugh.

So Carlos was not my favorite. Even once we start getting his side and see things his way I was not a fan. He is...he has his own insecurities and is very meticulous about what he eats and how much he works out. I don't know what it was about him that I really didn't like, but I didn't. He is a bit too something. And so I wasn't super excited to see the two of them get together, not like I would have been with Abel!

Now for most of this story these two have barely any interaction. They are at the gym at the same time, they had one life-changing dinner with friends, that we only get to see a little snippet of, and that is about it. So I don't really know why and how they fell for each other. I mean Carlos keeps saying again and again and again how she is not his type, how he doesn't want a relationship, how this is nothing, so why does he keep thinking about her? It was a bit much, especially when he has the random thought that he could be in love with her before they even know each other. I can get behind a love at first sight storyline when it is done well, but this wasn't even set up like that was what was going on. It was like somehow they both fell for each other without interacting much. Which was odd. Oh well, I am still excited for more from the Pennyverse.