Review: Sticking to the Script (Cipher Office #2) by Stella Weaver 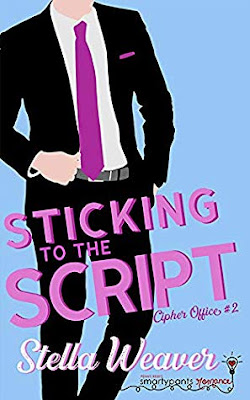 Steven Thompson had a bad year. A string of mean, kinky (the alarming kind, not the good kind), and crazy dating debacles combined with a boss who appears to be experiencing male-prenatal-psychosis means Steven’s stress levels are high. They’re so high, he’s decided to quit dating and focus instead solely on his job.

Until he meets Dr. Ken Miles.

Doctor Ken Miles is having a fantastic year. His hard work is paying off in a big way... professionally. But his social life? Not so much.

Until he meets Steven Thompson.

Steven isn’t so sure about Dr. Miles, but Ken is one hundred percent certain about Mr. Thompson. And even though both men know full well that the key to getting what you want out of life is hard work, they can’t seem to make them—together—work.

Will they ever get on the same page? Or just keep sticking to the same old script?

'Sticking to the Script' is a full-length contemporary romantic comedy, can be read as a standalone, and is book #2 in the Cipher Office series, Knitting in the City World, Penny Reid Book Universe.

Sticking to the Script is one of those book that makes me wish I were a better writer so I could adequately express how freaking amazing this story was. Seriously. I love love loved it! I didn't realize I would love Dr. Ken Miles as much as I do! And Steven? Oh, kill me now. These two - gah!! I knew I liked Steven from the Knitting in the City series, but in this book? I..he...I don't have words to describe how much I enjoyed this story. Cause it was everything.

Dr. Ken Miles, aka DKM, is the doctor that works with Elizabeth that if you have read her story you might remember. They were supposed to hook up at one point, but then Nico happened and he came off like such a jerk. I didn't like him, I don't know that you were supposed to in her story really, but now? Oh my goodness I loved him so freaking much. As soon as we got a chapter from his point of view I was done. He..oh god I loved him. He has this tough outer shell that he doesn't let many people see under. And he really does have the biggest heart, but he overthinks everything and when things don't go exactly as he had planned then he kind of messes up and can come off as the jerk that we originally saw. Like he doesn't mean to be, he recognizes that he can sound horrible and arrogant and not nice, but then he doesn't know how to fix it and it is not good. Oh, he was wonderful. He tries so hard, he wants to find someone to settle down with and be happy, someone who will see him for him and love him for that. That will be there for him and whom he can be there for in return. Oh, he got to me.

And Steven? Oh he was hilarious! The first times these two meet were amazing!! Steven is so funny, so calm and relaxed and he loves to rile up DKM as it is so easy to do so. He can see through DKM's mask he tries to wear and really see him. He could see when he was really uncomfortable, but trying to act like things were okay. He could see his defense mechanisms and could joke with him about it and get him to loosen up and be himself. Steven has his own things going on during this story and it is not all sunshine and rainbows for him, but I loved how it all played out. How these two got together and everything that happened. It was wonderful to read.

Now as far as I can remember Penny is the only author I have ever read that has made me tear up because a scene is so touching. Not sad, no one died or anything, just so happy and wonderful and perfect and it just brings tears to my eyes. And I am not a cryer. But some of Penny's things just get to me. Like when Janie is getting married - there are many scenes in that book where I tear up because it is so touching. Because people are so wonderful and I just can't help it. Well, now I have another author to add to that list because this book did the same thing. That ending? Those last few pages? Oh, they made me tear up because it was just so beautiful and heart-warming. Going into this story I didn't expect this to be one of my favorites. I hoped I would enjoy it, but I didn't. No, I adored it and couldn't stop reading it once I started. This story was amazing and is a super great addition to the Pennyverse.