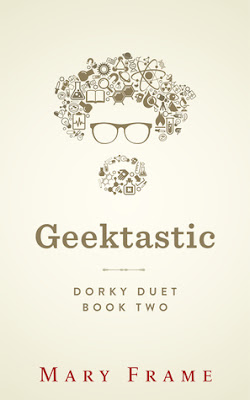 She needs a story. He’s trying to escape one.

Annabel Moreland can’t leave podunk Blue Falls, Texas, until her little brother graduates. But she’s about to lose the job she needs to support him like she promised, they’ll end up homeless wretches, and it will be all her fault. Worse, she can’t swing a cat in this town without hitting someone she would rather forget.

Unfortunately, the answer to this litany of problems comes in the form of an unforgettable, dead sexy, cat-loving, shenanigan-directing trickster named Jude Parker. He’s got enough secrets to fill the Mississippi and she’s on a mission to fish out every single one.

She just needs to do it without falling into his bed . . . again.

Geektastic was a fun read. If you have read the first book, Ridorkulous, then you will get to see those characters again and get to know Jude and Annabel. If you haven't you don't need to to enjoy this story, but it is also a great read so maybe go back and read it at some point.

Annabel doesn't like Jude. No way. She is a reporter and trying to get a story so she doesn't lose her job so she decides to circle back to Jude. Because he is hiding something she knows he is. Now she just has to figure out what and not fall for him along the way. She doesn't believe in love, doesn't want a relationship, just doesn't want any of that.

Jude was amazing. I loved him. He wants a relationship with Annabel. He wants to see where things could go with them because he sees how amazing she is. But she doesn't want that so he doesn't press. He has a lot going on anyways, things he doesn't really want to involve her in as it could be dangerous so he knows he should stay away.

Only of course things don't always work out the way you planned. These two were so much fun together. I loved watching them try and figure out what is going on and Annabel trying to fight her feelings. Jude doesn't let her off the hook. He pushes her when she needs it, but not in an annoying way. More in a calling her out on her lies kind of way so that she can see what she is really doing. She has hidden behind her shell for so long it is hard to find a way out of it. They were a lot of fun and it was nice to see who Jude really was underneath that crazy persona he had in the first book.