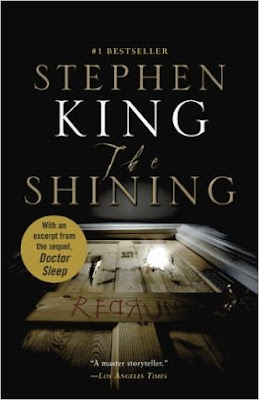 Jack Torrance's new job at the Overlook Hotel is the perfect chance for a fresh start. As the off-season caretaker at the atmospheric old hotel, he'll have plenty of time to spend reconnecting with his family and working on his writing. But as the harsh winter weather sets in, the idyllic location feels ever more remote...and more sinister. And the only one to notice the strange and terrible forces gathering around the Overlook is Danny Torrance, a uniquely gifted five-year-old.

It has been forever since I have read The Shining and followed Stephen King. I used to read him all the time in high school, but then I started college and had no time for recreational reading and kind of stopped. I got into other things and never picked him back up again. Only with the Doctor Sleep movie coming out and that being a sequel to this book I thought let's read them and see how they are. *some spoilers ahead if you don't already know the story*

Now...it took me a long time to get into this story. I watched the movie more recently and loved it, but the book...it was a really slow start for me. And even once it picked up it wasn't that I can't put it down I have to see what happens kind of thing for me. It was fine, but not as great as I had remembered. Also I don't think Danny was written particularly well. He did not come off as a four-year-old like he is supposed to be. So it was just an okay read.

Now I really like the idea of the story, but to me the movie is creepier or scarier as it is more the dad just going crazy. In this it is like evil spirits which...I don't find that creepy. Because I don't really believe in ghosts. There are definitely plenty of scenes that are creepy and fun, but in between there is a lot of meh. It was an okay read overall, but not my favorite. And the ending felt really quick for all that buildup. Oh well.