Review: Endurance: A Year in Space, A Lifetime of Discovery by Scott Kelly 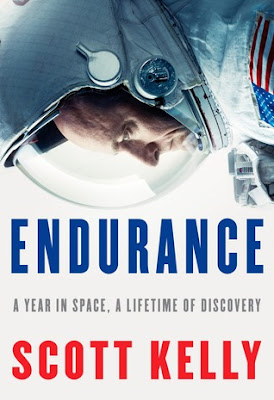 A stunning memoir from the astronaut who spent a record-breaking year aboard the International Space Station--a candid account of his remarkable voyage, of the journeys off the planet that preceded it, and of his colorful formative years.

The veteran of four space flights and the American record holder for consecutive days spent in space, Scott Kelly has experienced things very few have. Now, he takes us inside a sphere utterly inimical to human life. He describes navigating the extreme challenge of long-term spaceflight, both existential and banal: the devastating effects on the body; the isolation from everyone he loves and the comforts of Earth; the pressures of constant close cohabitation; the catastrophic risks of depressurization or colliding with space junk, and the still more haunting threat of being unable to help should tragedy strike at home--an agonizing situation Kelly faced when, on another mission, his twin brother's wife, Gabrielle Giffords, was shot while he still had two months in space. Kelly's humanity, compassion, humor, and passion resonate throughout, as he recalls his rough-and-tumble New Jersey childhood and the youthful inspiration that sparked his astounding career, and as he makes clear his belief that Mars will be the next, ultimately challenging step in American spaceflight. A natural storyteller and modern-day hero, Kelly has a message of hope for the future that will inspire for generations to come. Here, in his personal story, we see the triumph of the human imagination, the strength of the human will, and the boundless wonder of the galaxy.

I saw a little snippet from Endurance online somewhere that made me want to read this book. It was from the one small section in the beginning where the author talks about what is happening to him since being back from space for so long. So I thought this story would have more about what happened after as I would be incredibly interested in learning about that. I was never a huge space fan, don't ever want to go to space, but am super interested in what would happen to us if we were to live in space for years and then came back to earth. Only that one small section at the beginning was the only snippet of post life stuff we really get, besides having dinner with the family and normal things like that. Really I would have enjoyed more of what happens to "normal" astronauts who have been in space for less than a year. What do they have to deal with when they come back to earth? So I kept waiting for this info, to see what happens next, but it never came.

Now I was surprised by how interesting I found the chapters about Scott's year in the ISS. Like I said I was never much interested in space, but did find it fascinating how they manage to do things up in zero gravity. How if you are not super careful with things they can easily be lost for months or years. How everything has to be just so or it can be a major issue. I guess I knew a lot of it already, or it makes sense, but still I found it really interesting. It would probably be amazing to see some of the things Scott saw from space, the earth, the sunrises, everything, but this just reinforced my not wanting to go. It would be constantly working to make sure you can live there and is kind of crazy. Really fascinating how it all works and the resupplies and all of it. I really enjoyed those chapters.

Now about every other chapter was a chapter of how Scott went from a teenager who never paid attention in school to an astronaut. And it was so jarring every time I got to a new chapter and I wasn't reading about space anymore. I don't really understand why they decided to set up the book this way. Normally when I read something that jumps back and forth there is a transition, something linking the two so you can easily go from one time to the other, but this book didn't have that. It was just like we are up in space doing experiments and I am super focused on everything that is happening, then suddenly we are back in time trying to get into a different school so you can become a pilot. And I really didn't like it. Really I didn't care that much about his life pre-astronaut. It was alright, but my main interest while reading was what happened while he was up in space for a year. And eventually I did skip every other chapter so I was reading in chronological order instead of the back and forth the book was set up as. That did help tremendously in my enjoyment of the story.

Overall this was a really interesting read about the space program and how everything works. From Russia, where they launched to go to the ISS, to being up there for missions I found it all fascinating. I would be interested in reading more about different space flights and what happens on them. It was just a shame that the book was set up so that it jilted you from one place to another throughout the story.