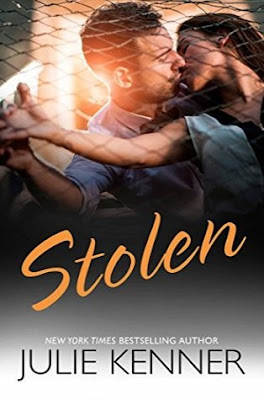 Melissa Tanner is just your average, everyday cat burglar, desperately trying to walk the straight and narrow path. So wouldn’t it figure that on the night she’s trying to return some jewelry, she’d find herself caught up in the arms of gorgeous Kyle Radley? The situation could have had some interesting possibilities—if Kyle hadn’t been an ex-cop! Right or wrong, Kyle can’t help wanting Mel… and he has a feeling the sexy felon has a weakness for him, too. But Mel says she’s pulled her last heist and wants nothing to do with a man who will always see her as a criminal. Still, Kyle is determined. He’s going to catch his thief—and then spend his days convincing her that a life sentence is a very good thing…

Stolen was a cute read. I loved Melissa and Kyle and how they were thrown together. She is trying to walk the straight and narrow path, trying not to be a burglar, trying to live by the letter of the law. Only when her grandpa steals something he shouldn't have she has to return it. And gets caught by Kyle. The ex-cop. Who doesn't trust her to really return it. Besides he was trying to get the same item himself to return to its rightful owner, his aunt, before it causes some family drama. So when he sees Melissa putting it back (or so she says) he doesn't quite believe her. And neither want to let the other out of their sight until it is returned to the rightful owner.

These two were really cute together. The way they were thrown together by their grandparents was a lot of fun to watch. They don't know if they should trust each other, but eventually they do. They were super sweet.

I also really enjoyed the grandparent's storyline and how everything worked out. Since Melissa is a thief, used to breaking into places, and Kyle has a security company and someone broke into one of his places (and he has no idea how), it seems logical for them to work together. At least on this one case so she can figure out where his system failed. And fall in love. Oh, I really enjoyed watching them work together and figure everything out. Yes, Melissa has a lot of hangups and thinks she can't be with someone who knows her background because then they will know her sordid past, but if she never tells them will they really know her? How will that work? I didn't understand why she felt she had to have a 100% clean slate with someone who didn't know her, but luckily it all works out in the end. This was a fun, cute, quick read.