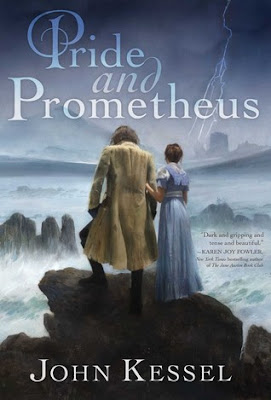 Pride and Prejudice meets Frankenstein as Mary Bennet falls for the enigmatic Victor Frankenstein and befriends his monstrous Creature in this clever fusion of two popular classics.

Threatened with destruction unless he fashions a wife for his Creature, Victor Frankenstein travels to England where he meets Mary and Kitty Bennet, the remaining unmarried sisters of the Bennet family from Pride and Prejudice. As Mary and Victor become increasingly attracted to each other, the Creature looks on impatiently, waiting for his bride. But where will Victor find a female body from which to create the monster’s mate?

Meanwhile, the awkward Mary hopes that Victor will save her from approaching spinsterhood while wondering what dark secret he is keeping from her.

Pride and Prometheus fuses the gothic horror of Mary Shelley with the Regency romance of Jane Austen in an exciting novel that combines two age-old stories in a fresh and startling way.

I loved Pride and Prometheus! It was so much fun to read. I mean Pride & Prejudice with the addition of Frankenstein? I am in.

Pride and Prometheus takes place after the events of both books. Mary Bennett is sort of resigned to be alone, though her interest in fossils gives her a possible suitor option with another gentleman who also is interested in them. He is not really someone Mary likes all that well, but he would do. She could at least still study her fossils and everything.

Victor Frankenstein is traveling with his friend through England to a remote island to try and keep his promise to the monster he created. He has to create a mate for his monster or his family is in danger. No matter how much he doesn't want to, no matter how much he is ashamed by what he has already done, he doesn't see a way out of it. And he doesn't have anyone he can talk to about it. At least his monster is not there...

Frankenstein's monster follows Victor on his journey to make sure Victor is doing what he says he will. He has to hide from everyone, try and steal some food when he can and just be invisible. People are frightened by him and he knows he will never fit in with normal society. He looks too different and that is why he needs Victor to create his mate. He wants someone who won't be revolted by him and who will live by his side in the wilderness away from everyone else. So he has to follow Victor to make sure he gets what he wants so badly, someone to connect with.

Now these three all interact together and I absolutely loved it! Victor and Mary meet at a party and Mary is instantly interested in Victor. He is the first man she has met who doesn't treat her scientific interests as something silly. He takes her seriously and is will to talk about all kind of things with her. She has a crush for sure so she is pretty excited when she keeps having occasion to see him.

Now Victor is worried sick about what he has done and Mary seems like a nice girl. But he has too much on his mind to really think about what is going on with her. Plus once he realizes his monster did indeed follow him he is beside himself with worry. What is his monster kills someone else? He will be responsible...he has to get to his secluded cabin as quickly as possible to try and get this monster away from him and everyone.

Now Mary and the monster do meet and I loved their conversations. They talk about lots of things like how just because Victor creates someone just for the monster that doesn't mean that person is going to want to be with the monster. I mean Mary had people who should have been perfect for her, suitors who should have lead to something, but she has faced nothing but rejection again and again. She also reflects on how she used to be when she was younger thinking herself all that, but she really wasn't. She is a bit ashamed of how she used to act, but it is what it is. I so enjoyed their conversations and loved watching them become friendly. I wasn't sure where the story would end up, but I enjoyed it every step of the way. You do feel bad for the monster because he just wants some companionship like everyone else seems to have. He is not that old, but he still has a lot to learn.

This was such an interesting mash-up of Jane Austen and Mary Shelly and I really loved it. The author did a wonderful job of bringing these two worlds together. It made me want to go back and re-read Pride and Prejudice and Frankenstein again.