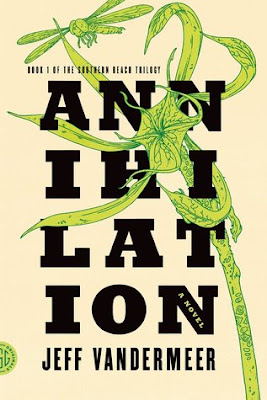 Area X has been cut off from the rest of the continent for decades. Nature has reclaimed the last vestiges of human civilization. The first expedition returned with reports of a pristine, Edenic landscape; all the members of the second expedition committed suicide; the third expedition died in a hail of gunfire as its members turned on one another; the members of the eleventh expedition returned as shadows of their former selves, and within months of their return, all had died of aggressive cancer.

This is the twelfth expedition.

Their group is made up of four women: an anthropologist; a surveyor; a psychologist, the de facto leader; and our narrator, a biologist. Their mission is to map the terrain and collect specimens; to record all their observations, scientific and otherwise, of their surroundings and of one another; and, above all, to avoid being contaminated by Area X itself.

They arrive expecting the unexpected, and Area X delivers—they discover a massive topographic anomaly and life forms that surpass understanding—but it’s the surprises that came across the border with them, and the secrets the expedition members are keeping from one another, that change everything.

Annihilation took me a little bit to get into, but in the end I really enjoyed it. Kind of creepy and interesting in this mysterious Area X.

This story is our main character, the Biologist, telling about her time in Area X as part of the twelfth expedition. This story is her field notebook of observations and what happened while she was there. The writing can be a bit clinical at times, a bit dry, but that works with the Biologist and the way she portrays herself. She is a scientist and a bit clinical at times and that is how she writes. I really loved the idea of this story. She goes into this area that people don't know that much about to try and map it and make notes on everything they observe while there. The last few missions were not greatly successful, people killed themselves, killed each other, or returned as shells of who they used to be. But, hopefully, that won't happen to them.

Now things are a bit strange in this Area X. There are some features the team encounters that were not on the maps they knew of the area. Some of the people start acting a bit strange and things get pretty tense at times. You don't really know what is going on or why things are happening as the Biologist doesn't know. I loved this story. It was so intense and creepy and cool at times. What she encounters, what happens to her and the other ladies while they are in there was awesome. I don't want to spoil anything so I don't want to say too much, but it was a lot of fun to read. Oh, it was awesome. I couldn't put it down even if it was a bit dry. The ideas in this story are like nothing I have read before. You get a few glimpses of something that might be happening which make me super excited to read more and see what will happen in book two. I can't wait to learn a bit more about the company who sent the Biologist and crew into Area X and what they might know about it.