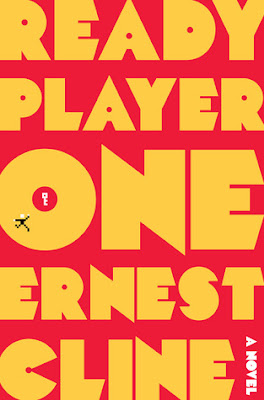 In the year 2045, reality is an ugly place. The only time teenage Wade Watts really feels alive is when he's jacked into the virtual utopia known as the OASIS. Wade's devoted his life to studying the puzzles hidden within this world's digital confines, puzzles that are based on their creator's obsession with the pop culture of decades past and that promise massive power and fortune to whoever can unlock them. When Wade stumbles upon the first clue, he finds himself beset by players willing to kill to take this ultimate prize. The race is on, and if Wade's going to survive, he'll have to win—and confront the real world he's always been so desperate to escape.

Ready Player One was such a fun read! I loved this adventure story filled with 80's nostalgia. It was all win win win for me.

Our main character, Wade, lives in the trailer stacks and doesn't have much. He scrounges computer parts and spends a lot of time in the OASIS, the virtual reality world of the future. The guy who made this world hid an easter egg in it and people have been trying to decode the first clue on the quest to find the egg for a long time. A few years already. Most people have given up, but there are many, like Wade, who are still trying to find it. Still studying everything the creator loved from the 80's in case it holds the clue to unlocking everything. They want to be ready if they ever find the start of the quest.

I really enjoyed this one. It was a quick read and right from the beginning I was hooked. Yes, there are a lot of 80's references, but they felt like part of the story and I didn't mind them so much. When they were added in a show-off kind of way it was because the characters were showing off their knowledge. Stuff like that was fine by me. I also love the 80's so...

Now I don't want to spoil anything or go into too much detail, but you should just go read this story. The quest, the adventure, I couldn't put it down. There were moments that I was on the edge of my seat reading waiting to see how everything would work out. You get to know a few other players, a few other people trying to find the egg as well as the bad guys who obviously want it to ruin everything. The bad guys were really horrible and so you definitely root for any of the other players to get to the end before them. I loved how everything played out. How you find one thing and it may not seem like much, but it is very important in the end. Or vice versa. It was so much fun!!