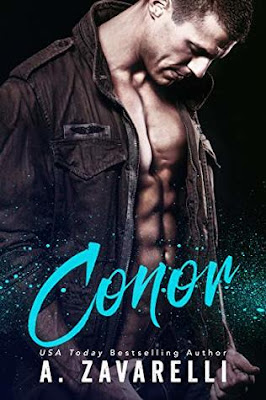 When I stumbled into a mafia-run club seeking a job, I was looking for protection.

Little did I know I’d need protection from him.

Conor O’ Callahan was exactly the kind of danger I was trying to avoid. He was gorgeous as sin with an accent hotter than Hades, but that’s where the charm ended. He was also cynical, cold, and downright cranky.

So, you could imagine my surprise when he gave me a proposition. Marry him or lose my life.

Desperate times call for desperate measures. I’ve learned to do what’s necessary to survive in this world, and that includes marrying a mobster. Regardless of what he might say, it’s only temporary.

It’s not like I’m going to fall for him.

Because that would be stupid, right?

Conor was a fun, quick read. If you have read the prior books in the Boston Underworld series and enjoyed them then this will be a great addition. If not, they can be read in any order so go ahead and jump right on in.

Conor was taken in by Crow and the Irish Mob when he was young and has been trying to make sure he proves himself every day. He would do anything for Crow and crew as they are his family.

Ivy saw some things she shouldn't have and is trying to hide out from a rival gang. If she can just make a little bit of money at the strip club the Irish Mob owns then she can get out of here and leave this mess behind. She just needs a little time and for no one to find her.

When Conor is tasked with finding out what Ivy knows about the things she saw, if she saw them. he doesn't expect to fall for her. He doesn't expect to want to keep her safe and the only way to do that is to marry her. While they might have started as a marriage of convenience, so Ivy stays safe and Conor doesn't have to do something he doesn't want to, it doesn't stay that was. It was cute watching these two try and work everything out. Ivy doesn't want to be a part of this world, with good reason, but there is just something there with Conor. So what happens when she falls for him for real? It was fun to watch. I really enjoy this whole series and this was a great addition.