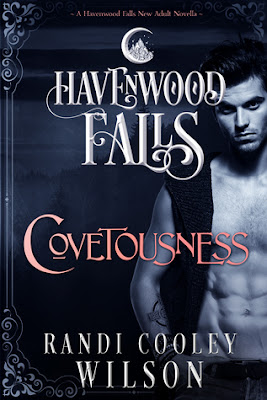 Welcome to Havenwood Falls, a small town in the majestic mountains of Colorado. A town where legacies began centuries ago, bloodlines run deep, and dark secrets abound. A town where nobody is what you think, where truths pose as lies, and where myths blend with reality. A place where everyone has a story. This is only but one…

Graysin Ravenal hasn’t seen her sister in years, but when she learns Jenni has mysteriously died in a library fire, she leaves her upscale beach community for the mountains of Colorado in search of answers. She needs a job, and Havenwood Falls happens to need an interior designer for the new library. The last thing she needs, though, is to fall for the dark and sexy Everett Weston, aka her new boss.

Their undeniable mutual attraction aside, keeping their relationship professional proves impossible as their lives collide in more ways than one.

Graysin finds herself immersed in a world heavily guarded by secrets and lies—a world Everett seems to know quite well, making him her only hope in finding the answers she seeks. As they work together to unlock the mystery surrounding Jenni’s death, their ever-increasing passion must be denied, no matter what their hearts say. Because the story they’re thrown into is one of desire and danger that not only uncovers a centuries old secret that could destroy the town, but also reveals the darkness of Graysin’s family’s past—a darkness that changes her life forever. And some secrets just can’t be forgiven.

This is a New Adult paranormal romance in the Havenwood Falls series of New Adult and Adult fantasy novellas featuring a variety of supernatural creatures. The series is a collaborative effort by multiple authors. Each book is generally a stand-alone, so you can read them in any order, although some authors will be writing sequels to their own stories. Please be aware when you choose your next read. We do recommend that you read Forget You Not first as an introduction to the town and its eccentricities.

I feel like Covetousness suffered from short story syndrome. The issue where it is a shorter story and there is too much story to fit into the short amount of space. Because this book could have been really interesting, I think I would have really enjoyed it because it is different from other paranormal I have read, but everything just happened too suddenly. Plus you are told all the information in this giant data dumps which would have worked better had this story been longer. If you would have drawn it out, let Graysin figure things out slowly and whatever between her and Everett happened more naturally it would have been interesting. I thought it would be more of a mystery adventure, but it is more of a here is what is happening, okay now here is our next info dump, everyone is in love, the end. Way too quick for the amount of story trying to be told.

Graysin's sister died in a mysterious fire. She hasn't seen her sister in years so when she finds out she died she is determined to figure out what happens. So she goes to the town where she had been living and...strange things start to happen and she meets Everett and two seconds later they are in love and she knows everything. The end. Really this story made me want to search out more books with the kind of paranormal creature Everett is as it is something I haven't read and think I would enjoy. Maybe I will give this author another try with one of the authors longer stories and see if I enjoy it more.