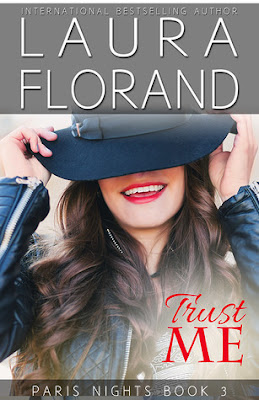 She's nobody's damsel in distress...
Top Parisian pastry chef Lina Farah is used to fighting for her success. But when a violent attack shatters her security, she needs a new tactic to battle her dragons. What better way to banish the monsters under her bed than by inviting a sexy SEAL to tangle the sheets?

He's a professional dragon slayer...
Elite operative Jake Adams has never stayed in one place long enough to form a lasting relationship. Lina’s fire and beauty tempt him to give her the hot affair she craves. But her spirit and courage make him long for more. Can he convince a woman seeking forgetfulness to dream of ever after...with him?

I love how Laura Florand writes a story. How her characters think and see the world. It is so very different from me in the best of ways. I always finish and wish I saw things the way they do. That everything was so beautiful and I just love the way she writes. Trust Me was no exception. Another great read from one of my favorite authors. If you have read the prior books in this series you have already seen bits of these characters and what has happened.

Trust Me is the story of Lina and Jake. Lina who is a tough, strong, fought her way to the top doesn't need any men lady. She, like the other women in this series, have clawed their way to the top of a male-dominated world. Lina is a top pastry chef and she is not going to let anything stop her. Until her world gets turned upside down, her cousin ruined her safe space, and now she is trying to fight her way back to a future. Figure out how to move on and live again after everything that has happened. She puts on a brave face every day and tries not to let everything affect her, but inside she is scared. Scared of not having a tomorrow. Scared of what will happen.

Jake is a special ops guy who is in Paris with the other guys on his team. The one guy, Chase, was involved in the situation that tore Lina's world apart. If you read the last book in the series you already know about Chase and Vi. But if not you can still jump right into this book. Jake has never seen himself with a happily ever after. With a future involving a wife and kids. With what he does for work and how often he is gone he doesn't think it is for him. He wants it, especially now that he is tired of one-night stands and women only wanting him for sex. He wants a relationship, he just doesn't think he can have it.

When Jake first sees Lina he is intrigued by her. She is so strong and keeping everything together when so many people wouldn't. She is a hero to him and he wants to get closer, but knows this is a bad time.  After all she is trying to deal with some heavy stuff. These two. They both like the other, but it is so...I love the way they think about things. I love how obsessed Lina is with Jake's freckles. How the sun couldn't keep away from him. How Jake sees Lina still as this strong woman who doesn't need anyone else. They were so wonderful together.

These two have a bit of a rough ride, some misunderstandings and assumptions made that make it a rocky start for them. But oh they were wonderful. I loved this story. Two people who don't believe in a future trying to figure out a way to believe together. It was wonderful. That and I love how food is so powerful, says so much when made like Lina makes it. How she can pour her heart and soul into something and how that can be intimidating to someone like Jake who doesn't always know what to do with all that feeling.

Overall this is a wonderful read. I love these characters, I love the world the author creates, I loved everything about it.