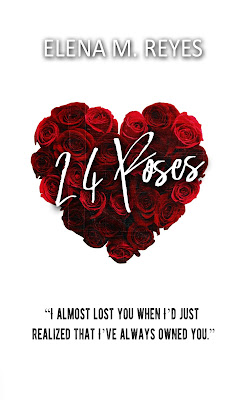 24 roses.
24 days filled with declarations of love.
24 moments where life will mark her as mine.

I’ve loved Anahi Pratt since she moved in next door at the age of twelve. With her knobby knees and a mouthful of braces she made my heart thump harshly inside my pre-pubescent chest. One look into the greenest eyes I’d ever seen and I was hooked for life. Owned.

However, I was tongue-tied and confused. Did the only thing I could and offered my friendship.

After years, those feelings never changed. Instead they grew—morphed into something deep and profound. But never once did she see me as more than a friend. Never did she see the man that worshiped the ground she walked on. The man that desired to be what she wanted. Needed.

She was mine and it was time I claimed her.

24 Roses was a good read. I enjoyed watching Anahi and Bryson figure out the more than friends thing. Bryson has always been in love with Anahi. Since the first moment he saw her when she moved in across the street she was it for him. Only she hasn't figured out that they would be amazing together yet. She hasn't seen him as more than friends, and Bryson was willing to wait until she finally did. When she gets in a car accident and he thinks how his life could have ended, how she could have died and he would be without her, he wasn't willing to wait any longer. He was going to do whatever he could to win her over and get her to see that there is something more than friends there.

Bryson was sweet in his wooing of Anahi. He was very up front and told her exactly how he felt and what was going to happen. It was fun. She doesn't know what to think or how to move on to this next step because she is afraid. Afraid that if she does and things don't work out she will lose her best friend. And I understand that totally. But I didn't always understand Ani. She....the way she was written sometimes had me scratching my head. Most of the book is from Bryson's point of view, but then you will have sections from Anahi as well and some of the things she did didn't make sense to me. Like Bryson is wooing her and her good friend is all is this happening finally? And Ani makes up all these lame lies for no reason. Like why does it matter if your friend knows what is going on in your life? If you are confused about what you should do or what you want wouldn't you talk to your friend? To me it didn't make sense as if it were me I would talk to someone. Plus there was no real reason to lie...it was just little things that popped up now and again that were a bit off for me.

That and Bryson's alpha ways at times were a bit...creepy? I normally love alpha males, but the way he was written, the way he thought and talked at times I did not like. It didn't keep me from enjoying the story, it wasn't very often, but sometimes it was there niggling at me. Otherwise the two of them were cute together. Bryson trying to break down Ani's walls and Ani trying to figure things out. It was fun.

Oh one other last thing that bugged me a bit - everything happened really quickly in the end. Too quickly. Probably because I didn't know these characters before the accident, didn't see them so close, was only told that they have been bff forever, so it felt a bit rushed to fit everything in suddenly. If we would have gotten some of that backstory, some of them as friends, it would have helped to have everything work out the way it did. Oh well. I did enjoy this read even if I have a few things that bothered me. It was fun, hot at times, and over a good read.