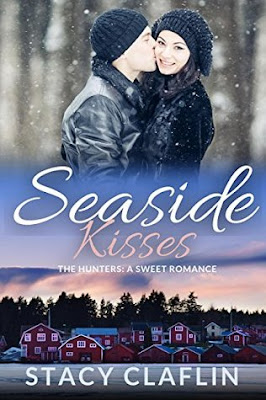 Rafael Hunter never thought he’d return to Kittle Falls, but life gave him no other choice. Los Angeles chewed him up, spit him out, and sent him back to square one.

Amara Fowler has lived in the small beach town her entire life. She’s overcome her shyness to grow into the woman she always knew she could be, but she never forgot her secret crush. When the alluring Rafael returns, he can’t help but stir in her a whirlwind of old feelings.

They’ve both changed so much. Has life kept them incompatible or has it molded them into a matching set?

Seaside Kisses is the fourth standalone in the Seaside Hunters collection, a series of sweet contemporary romance novels. If you like falling head over heels for characters as they fall for each other, then you'll love the latest entry in this light, romantic series with just a hint of mystery.

Seaside Kisses was not for me. The story was too simple and all tell no show and moved way too quickly. That and it seemed like all feelings were based on the physical aspects and it wasn't very good. *Some spoilers ahead*

Amara has always had a crush on Rafael, but she was the nerdy fat kid in school. Everyone always picked on her so she doesn't think much of herself. Even if she has changed, she got contacts, lost weight, she still thinks of herself as that fat kid. When she sees Rafael is back in town she thinks nothing will ever happen with him. I mean look at her and look at him! He wouldn't go for someone like her.

Rafael is back in town after his business partner left him with a failing business and started shacking up with his girlfriend. He is a bit heartbroken, but when Amara is there to help him when he needs it he starts talking to her a few times. He can't get over how much she has changed and wishes he would have talked to her back in school since she is such a nice person.

When someone starts messing with Rafael, breaking his property and such, he tries to get to the bottom of it. Only they are too smart for him and things get a bit carried away. Now as for who was giving him a hard time? That didn't make much sense to me. I have no idea why the people who did it would do stuff like this. It was never really satisfactorily explained and left me scratching my head. That and when things get out of hand Amara goes to the cops and they were hilarious in how terrible they were. The whole thing was kind of a mess for me.

So Rafael, after only talking to Amara a few times, gets into a bad situation and then realizes that Amara is not repulsed by him even though his face is messed up at the moment. Like she didn't go running screaming and this is the second time she has seen him not at his best. So he should marry her. Because she didn't run screaming. And she is so nice. It was...I didn't understand. There was no I love her so much I need to be with her I should marry her. It came off more she likes the way I look, I like the way she looks, we should get married. I mean he did tell her he loved her before he proposed, but still. It never felt like the two even knew each other let alone were in love. It wasn't good.

The whole story was tell not show. I was told a lot of things, how some people were or what they felt, but I never saw it. That and Amara's self confidence issues due to high school kept me from enjoying this story. It was a bit too much for me.