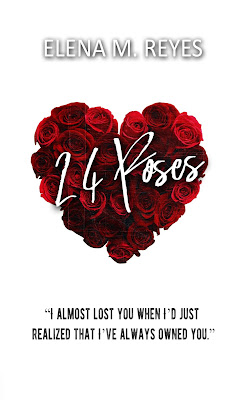 
24 days filled with declarations of love.


24 moments where life will mark her as mine.

I’ve loved Anahi Pratt since she moved in next door at the age of twelve. With her knobby knees and a mouthful of braces, she made my heart thump harshly inside my prepubescent chest. One look into the greenest eyes I’d ever seen, and I was hooked for life. Owned.

However, I was tongue-tied and confused and did the only thing I could: offer my friendship.

Over the years, those feelings never changed. Instead, they grew—morphed into something deep and profound. But never once did she see me as more than a friend. Never did she see the man that worshipped the ground she walked on. The man that needed to be what she wanted. Needed.

She was mine, and it was time I claimed her. 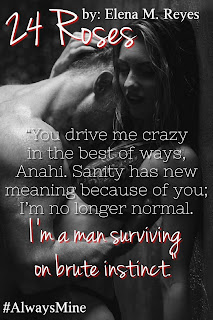 “How can you say that with this hideous scar on my thigh?” Fuck, she could be as stubborn as a mule.

“That scar…” I hissed out, my eyes searching the floor around her feet for the broken glass I’d heard fall through the door. It was nothing big. A small figurine broken in two pieces. Taking the remaining steps between us, I paused in front of her. “This is proof that what could have been tragic…wasn’t.” Taking her face in my hands, I tipped it up and lowered my forehead to hers. “It means that you are okay and here with me. That a drunken asshole crying over his divorce didn’t take the most important thing in my life away.”

“Fuck are you talking about, Anahi?” Every muscle within me tensed as I waited for her to explain herself.

“That I should’ve listened to you when it came to the men I dated.”

Staring into her sad green eyes, my heart clenched. Her pain was mine. “Shit happens, and it was not your fault.”

“Had I been paying attention and not thinking about the ‘what ifs I…” Anahi’s face bloomed with a sudden rush of embarrassment.

“You want to know? Because trust me, I remember everything about that night.” Letting out a bitter chuckle, she stepped back and released my hands. I missed her warmth immediately. “Fuck!” Ani yelled out while turning around. Placing her hands on the top of her dresser, she hung her head. A sob was caught in her throat, and I rushed forward to wrap her in my arms.

The pain medication she’d been on tended to make her emotions fluctuate a bit.

“Talk to me, babe.” With my arms secured around her waist, I pulled her in closer. Ignored what the feel of her warm skin against my own created. “Let me in.”

“I’m sorry.” Wiping at her eyes, Anahi took in a deep breath and let it out slowly. “Didn’t mean to pull the crazy chick card on you.” This was said with a laugh, but there was real hurt behind the action. “There’s too much going on upstairs, and I don’t know how to handle it. Between nightmares and anger, it’s a constant roller coaster.”

“Start from the beginning,” I hummed against the top of her head. “You’ve never wanted to give me details about that night. Always vague and avoiding—something about what happened is hurting you. Let me in, dollface.”

“Why do you always call me pet names?” Diversion tactic if I ever heard one; that, and she needed her ego stroked. Not that I minded in the least. For some unknown reason, Ani felt as if the small scar over her sculpted brow was this heinous thing that offended the world.

“And neither is yours. Tell me what’s eating you up inside, Ani.”

“Every time I close my eyes, I see those high-beam lights coming at me followed close by the sound of screeching tires.” A shiver so hard ran through her that it rocked me to my core. All I could do was hold her tighter, with my presence show her that I was here for her. “Next came the sound of metal bending—caving in on itself—as a searing pain shot up the side of my body. It burned. The intense jolt caused me to almost black out, but even as everything intensified around me, I had only one thought in my head.”

“Say it,” I whispered low into the crown on her head.

Running her fingers over my hand, she shook her head. “Doesn’t matter in the grand scheme of things, Bryson, but it’s those what ifs that eat me alive. I’ve lost time I don’t know if I could ever get back.”

“You want to know what tortures me about that night?” Turning her around so my blue eyes could meet her green ones, I placed my hands at her hips and squeezed them lightly before holding her in place. No more hiding. Anahi wasn’t running away from the damn truth that was currently smacking us in the face.

Bringing a shaking hand up, she cupped my jaw. “What?”

“The fact that I almost lost you when I’d just realized that I’ve always owned you.”

Elena M. Reyes was born and raised in Miami Florida. She is the epitome of a Floridian and if she could live in her beloved flip-flops, she would.

As a small child, she was always intrigued with all forms of art—whether it was dancing to island rhythms, or painting with any medium she could get her hands on. Her first taste of writing came to her during her fifth grade year when her class was prompted to participate in the D. A. R. E. Program and write an essay on what they’d learned.

Her passion for reading over the years has amassed her with hours of pleasure. It wasn't until she stumbled upon fanfiction that her thirst to write overtook her world. She now resides in Central Florida with her husband and son, spending all her down time letting her creativity flow and letting her characters grow.