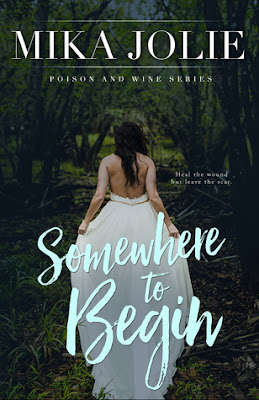 There are wounds that never show on the body.

For twenty-nine years, Colbie Bennington does as expected with an eternal smile stained on her lips. The biggest chances she’s ever taken can be counted on one hand, three fingers to be exact—her battered red chucks, painting her toenails a vibrant blue, and her wedding dress. Always the dutiful daughter and a Stepford fiancée, she has never acted on impulse, never been in love.

On her wedding day, Colbie ends a toxic relationship, drops the fake smile, and says, “I can’t do this anymore.”

Navy SEAL Zander Serrano returns home broken and burdened with a volcano of remorse. Too trapped in a mental war to be at peace and too damaged to be at war, he shuts the world out. The last thing he expects is to feel, especially for a runaway bride with her own baggage.

Two empty hearts marred in different spots find themselves drawn to one another. Each with their own scars. Some, the world can see. Others, unseen to the naked eye.

They say two broken people should not be together. But for Colbie and Zander, their attraction is undeniable, unexpected.

Can two souls with fractured parts be the best cure for each other’s wounds?

Starting over is never easy, but sometimes in life, everyone needs somewhere to begin.

Somewhere to Begin was not my favorite read. The writing was a bit odd at times, there were times when it was a bit confusing as to where people were or what they were doing, and I never understood Colbie and didn't like her. It was not a very good read for me.

Colbie has always done what her parents wanted. They thought she should marry this guy, and even though he was physically abusive she was still going along with it. Because of her parents. Who didn't know about the abuse. Why? Why didn't she say something before now? Was she so beaten down and cut off from other people by her fiancé? Did she not feel like she had any options? Was she wanting to leave, but unable to due to the abuse and such? No. I really have no idea why she stayed. She was not like a battered woman. She was just a stupid woman who is staying with an abuser, going to marry him, because she doesn't want her parents to think poorly of her. Or something. It made no sense to me. I love reading books where people overcome things, where ladies get out of abusive situations and make more of their lives, but not like this. Not where it seems like she is choosing to be in the relationship even though she could easily leave. People in these situations often times don't have the choice, they can't get out of it, and yet Colbie chose to stay for some reason. At least she wakes up for a minute and walks out of her wedding to start her life over somewhere else.

Now she walks out and then never thinks of her ex again really. She doesn't even go that far or try to hide where she is. So she is not worried about him coming after her? So if that is the case then again why didn't she leave sooner? I didn't understand. So now she is in a new town with a new hot neighbor and trying to figure out what she wants to do with her life. It was just eh. She was really judgmental of everyone, at one point someone gave her a card for Zander's older brother so he could do some work for her and she instantly was all how does this married lady know Zander's brother?!? No one cared about marriage vows in her old world, maybe this lady was having an affair with Zander's brother!! It was just like wait what? Why would you assume that a married lady who knows a contractor is having an affair with said contractor? Why would that be your first thought? Yes, I know you said marriage didn't mean anything in your old world, but really? Really. So every married person who knows anyone of the opposite sex who is not their partner you are going to wonder if they are cheating on their partner with said person? Really? It made no sense! Colbie was ridiculous. That and she was super jealous of everyone. There was one girl who everyone kept telling Colbie was like a sister to Zander, he said it, she sees it with your own two eyes, the girls says it, and yet you still keep getting jealous of her and wonder if there is something going on between them. Really? It was just too much. It was like all of the times when people would tell her nothing is happening were forgotten two seconds later. Every time it was like it was new informations, but I kept thinking wait...you know this already so why are you so relieved to know nothing is going on?? I didn't understand her at all. I didn't care for Colbie so...it made the book not so good to read.

Zander is okay. He has scars from his time in a war zone, scars on the inside and out. He was really prickly when the book opens, still not ready to deal with his new reality, and very sensitive about some things. All understandable. He likes Colbie from the start, but doesn't want to start anything with her. She can do better.

Now the real issue was the writing. I kept coming across passages that read as odd to me. The way someone thought or said something was strange and kept pulling me out of the story. Nothing super bad, just somehow off. Like "It didn't take much to imagine her as a sexual creature" when Zander is talking about Colbie. How he is attracted to her. It was just...odd in the context especially. There were also large chunks of text devoted to explaining what something was. Like now we are going to take a break from our story to explain to readers what things are. About the Gulf War and what it was. Stuff like that that really didn't fit. Maybe they could have been footnotes for readers who don't know these things, but they weren't told in the context of the story. They were just placed into the story so the reader would know the information. It was odd.

There were also times when the timeline was a bit mixed up. For example early on Coblie freaked out at a coffeeshop, then she apologized for freaking out at the pier, only she was never at the pier. That came later and then I thought oh! Okay. That first comment was just out of place. All of this together worked to make this story not that good for me.