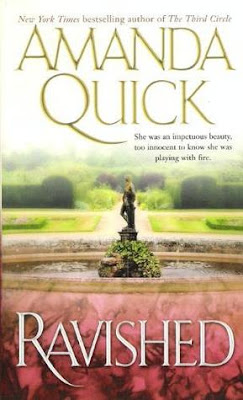 From the cozy confines of a tiny seaside village to the glittering crush of the a fashionable London soiree comes an enthralling tale of a thoroughly mismatched couple . . . poised to discover the rapture of love.

There was no doubt about it. What Miss Harriet Pomeroy needed was a man. Someone powerful and clever who could help her rout the unscrupulous thieves who were using her beloved caves to hide their loot. But when Harriet summoned Gideon Westbrook, Viscount St. Justin, to her aid, she could not know that she was summoning the devil himself. . . .

Dubbed the Beast of Blackthorne Hall for his scarred face and lecherous past, Gideon was strong and fierce and notoriously menacing. Yet Harriet could not find it in her heart to fear him. For in his tawny gaze she sensed a savage pain she longed to soothe . . . and a searing passion she yearned to answer. Now, caught up in the Beast’s clutches, Harriet must find a way to win his heart–and evade the deadly trap of a scheming villain who would see them parted for all time.

I LOVE Beauty and the Beast. Love it. I have seen the Disney movie approximately a billion times. It is one of my favorite stories. And I love retellings of the story. It is pretty easy to make me love a story if it is Beauty and the Beast related. I also love old timey books. Love them. Plus I love fossils! I could go look at fossils all day and be happy. Love them and geology and all that stuff. It is the best.

So all of this love makes it seem like I should love Ravished right? I mean it is about a girl who loves fossils, collects them and tries to find them in the caves near her house. It is old timey. It is a re-telling of Beauty and the Beast. It seems like this would be a shoe in for one of my favorite books. Only it wasn't. It was bad. How did the author take all these elements I love and turn it into this book that was so frustrating to read? Well by writing it in this "zany" way that is supposed to be fun/funny and it didn't work for me. As it usually doesn't when it comes to books that are supposed to be humorous. I knew right from the start, when Mrs. Stone, the housekeeper, faints. I know it was supposed to be humorous, but it just made me roll my eyes so hard and thinks oh, this is the kind of book I am going to be reading? Okay. And I didn't stop rolling my eyes or wanting to bang my head against the wall the whole time I was reading it. It wasn't for me, but I see where other people would find it humorous.

So Harriet is one of the most annoying females I have read. She acts like a petulant child when she doesn't get her way, never thinks about what effect her childish actions will have on others, and just keeps getting herself into messes because she cannot think. She loves fossils. Fossils, fossils, fossils. Tooth fossils to be exact. Oh tooth fossils. Do you like tooth fossils? She likes tooth fossils. If only she could find more people to talk to about tooth fossils, or find more tooth fossils. Ugh. It was like let's see how often we can use the word fossil in this story. It was fossil this and fossil that in a really unbelievable way. I know, it is probably supposed to be humorous, but it was just annoying. It didn't go into what the fossils were or anything about them for the most part. I think there might have been two times when something was explained or talked about more than an 'I like tooth fossils' kind of way. It was frustrating for me, especially because I do like fossils! I would have been interested in reading more about what ones she found in the cave and stuff like that. But no, I just had to keep reading about how much Harriet loves fossils. So much so that she completely loses all sense when they are in the picture. It was ridiculous!

Harriet also never took into account what her actions would do to Gideon. What people would say if she didn't go along with what he suggested. She was just all no, no, no! I don't care what people say about me! And he would have to be all, and what about me? What about what they will say about me? You know the past 6 years have been incredibly difficult for me, everyone thinking I am a terrible person for things I didn't do, and then she would be all oh noes! I totes didn't even think about you even though I am supposedly in love with you. Yeah, sure. Maybe think for two seconds about how things will be for the guy you claim to love. Ugh she was annoying.

As for Gideon he was better, but still he was off for me. He has a scar on his face and his honor has been tarnished and no one believes he didn't do what they say he did. After a while he just stopped trying to tell people the truth. Until Harriet, who believes he is good right from the start. The writing in the book didn't make it so I felt any connection between these two characters, so when they were supposedly falling in love I didn't see it. It wasn't that good. That and the sexy time scenes were really uncomfortable for me. Not sexy. Not good.

This whole book was just kind of a disaster for me. I didn't like the characters, I didn't see the connection, it was kind of all over the place. I didn't like it. Oh, and the thieves are caught pretty quick which left me thinking what now? What is the rest of the book going to be about? It all moves so quickly. Like things were introduced, then dealt with in a few pages it felt like. Then the ending...ugh. Things were resolved okay I guess, but it was so lame. The everyone lived happily every after and all issues were fixed was just too much. It was too easy. Too simple. I didn't enjoy it. So yeah, this book was not for me.