One More Kiss (Shaughnessy: Band on the Run #1) by Samantha Chase 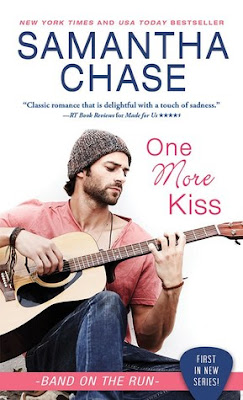 Matt Reed was living the dream until a bad career move sends him back to his hometown for much-needed privacy. Instead, he finds someone he never expected: the woman whose steamy kiss he remembers like it was yesterday.

Vivienne Forrester finally has her life in order... until Matt moves back to town. She doesn't want to think about the time she threw caution to the wind with him, but running into him everywhere, it's impossible not to...

One More Kiss was a fun read. Matt and Vivienne were so cute together!

Matt is in the band Shaughnessy - if you have read This Is Our Song then you know frontman Riley already and will see him pop up again in this story! The band had decided to take a break and Matt moved on to bigger and better...only it wasn't bigger and definitely not better. He flopped. Big time and the media will not let him forget it. This is the first time he has had to deal with this so he doesn't really know what to do. When it might start affecting the rest of the band members he is told to go hide out somewhere until this all blows over.

When Matt's best friend Aaron offers him a secluded place to stay while he is out of town Matt is eventually talked into it. The problem? It is back in his hometown, somewhere he has not returned to once since he left at 18. He has some demon to fight for sure, but it is somewhere to hide out and maybe take a break and work through some things.

Only things don't work out the way Matt plans. For one thing he did not expect Aaron's sister, Vivienne, to be moving into the guesthouse she just finished remodeling. Or the spark that is there between them. Or Vivianne seemingly not liking him for some reason...though there is something there in the back of his mind. Something he might have forgotten as he was living the rock star lifestyle.

I really enjoyed this story. Vivienne really likes Matt, but she is hesitant to start anything with him. She has always like him, but things don't always work out the way you might want. And she is a planner. She makes her lists, keeps everything just so, she liked everything in its place. Only Matt shakes that up a little bit. She just got her dream job, her dream house, everything is falling into place. Can she really trust Matt? And what happens when he goes back to his real life? Should she take a chance on him?

These two were really cute together. They both have things they need to work on, but together they are better than they were. Another great read from this author.