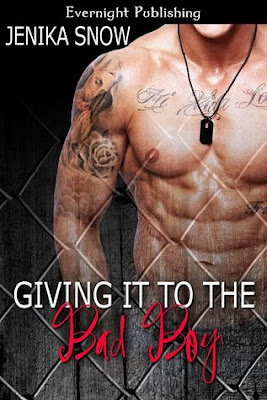 It all started when Kiera gave the bad boy her virginity...

Kiera knew Reese Trenton wasn't for her, but she couldn't stay away. He was rough around the edges, tattooed and pierced, and fiercer than any guy she had ever met. He knew too much about sex, got drunk, and started far too many fights. He was a bad boy, but Kiera still wanted him in the worst kind of way.

Reese's life is lonely, despite always being surrounded by people. He's only wanted one thing, and that is Kiera Sheppard, the girl he has watched from afar for four years. As they grow closer, Reese wants to give her everything and show her he is worthy of her love. But his sordid past tears their bond and he doesn't know if he can redeem himself and show her she is the most important thing in his broken life.

I enjoyed Giving it to the Bad Boy more than I thought I would. The writing was definitely more tell than show, a bit odd to read, but I really liked it. Maybe I was just in the right mood or something, but I stayed up late finishing the story.

This is the story of Kiera and Reese. They both have secretly liked the other and when something bad almost happens to Kiera, Reese is there to help her. Then they start talking and one thing leads to the other and yeah.

This story was an odd read for me as I shouldn't have enjoyed it as much as I did. The story itself was a bit....light? Like not much happened, and it didn't always make sense why some of the characters said or did some things, but I liked it. I didn't mind that. I mean things move quickly, but it was alright. Oh, there was some stupid drama thrown in at one point that didn't make any sense, and yet I was okay with it. I don't really know what it was about the story that I liked so much. It wasn't like I really connected to the characters or the writing was so fabulous I couldn't hate it or something. I guess I was just in the right mood. Who knows. It was a quick, easy read.