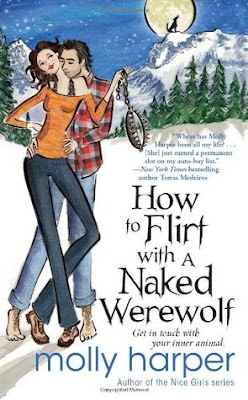 Even in Grundy, Alaska, it's unusual to find a naked guy with a bear trap clamped to his ankle on your porch. But when said guy turns into a wolf, recent southern transplant Mo Wenstein has no difficulty identifying the problem. Her surly neighbor Cooper Graham—who has been openly critical of Mo's ability to adapt to life in Alaska—has trouble of his own. Werewolf trouble.

For Cooper, an Alpha in self-imposed exile from his dysfunctional pack, it's love at first sniff when it comes to Mo. But Cooper has an even more pressing concern on his mind. Several people around Grundy have been the victims of wolf attacks, and since Cooper has no memory of what he gets up to while in werewolf form, he's worried that he might be the violent canine in question.

If a wolf cries wolf, it makes sense to listen, yet Mo is convinced that Cooper is not the culprit. Except if he's not responsible, then who is? And when a werewolf falls head over haunches in love with you, what are you supposed to do anyway? The rules of dating just got a whole lot more complicated. . . .

I really enjoyed How to Flirt with a Naked Werewolf. I was hesitant going in as I thought it would be cheesy and just not my thing, but I was so wrong. It was more serious than I expected. Yes, it was lighthearted at times and Mo could be really adorable in her ways, but it still felt more serious to me. I loved it.

Mo needs to escape her parents. They are a bit overbearing and have never been the normal parent types. They didn't even want her to go to school as that would ruin her. They are hippie granola live on a commune save the planet kind of people. And that is not Mo. She doesn't want that from her life. For so long she has made decisions based on what she knew her parents wouldn't like and she needs to get away. She needs to clear her head and be alone for a while. So she moves up to a small town in Alaska. She is renting a cabin and quickly gets a job at the local bar cooking food and things seem to be going well. She is settling in and making friends and figuring things out.

Since she is new in town she gets all the male attention at first, but most of it is just harmless flirting. The one guy does seem to really like her, but she is just not sure. He is nice and all, but is she looking for a guy right now? Then there is Cooper. Surly, grumbly Cooper who is always not so nice to her. Whenever he is around it is like he is in a bad mood and they cannot seem to get along. All they do is fight, so why is Mo so attracted to him?

This was a slow simmering romance. Cooper and Mo both liked each other, but they kept clashing. Until they didn't. Until things changed and it was so much fun to watch. You know she kind of likes him, but she keeps trying to see if maybe it would work with someone else. I mean why should she sit around when Cooper is so surly all the time and see if he will come around? She's got things to do. If only she could stay out of trouble. Luckily she also has the protection of a big, bad wolf who will save her when she gets herself into all kinds of tricky situations. Mo really isn't one to listen. She does what she wants and doesn't mean to get into bad spots, she just has a knack for it.

This book was kind of equal parts light fun and darker, more serious stuff. I enjoyed getting to know Cooper and his family, though can I just say his sister is the worst! I hated her so much. I really liked Mo, especially how much she would stand up for Cooper even if he didn't need it. Mo was great and handled everything incredibly well. This was a fun read. Much better than I expected. I don't usually like paranormal romance, but I am glad I gave this one a try.