Review: You Promised Me Forever (Forever Yours #1) by Monica Murphy 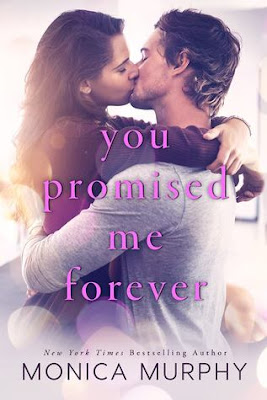 I’ve got it all, they say. I’m the starting quarterback for the best NFL team in the league. I’m rich. I’m famous. I can have any woman I want, any time I want.

Yeah, I’ve got everything—except for the one who got away. How do you move on from loving the same girl since you were in the seventh grade? She promised me forever until forever got too hard and at nineteen, she dumped me.

Now she’s walked back into my life. Just as beautiful. Just as sweet. Just as smart. More grown up and incredibly sexy…

We’re older now. Supposedly wiser. This time, I’m going to fight for what I want, no matter how hard it gets.

This time, I’m going to make her mine.

I was excited to start reading You Promised Me Forever because it had been a while since I read this author and I remember really enjoying her stories. So I thought I was in for a treat. Only...it was not that good. I kind of hated Amanda and she ruined the story for me.

Amanda is kind of a terrible person. She broke up with Jordan when they were younger, which totally made sense. I see why it didn't work out with them, especially because Amanda is incredibly insecure. Incredibly. It never would have worked with them. But now, after seeing an interview Jordan gave mentioning the one that got away, she decides to just contact him quick on social media. I mean he can't be talking about her, but she hasn't really ever forgotten about him no matter how much she wants to. Because he has to have moved on by now.

When Jordan hears from Amanda again he is not sure what to think. Part of him wants to show her that he is fine without her and part of him wants to try and get her back. Because she has always been if for him. So he invites her to come to see him play and things go on from there.

So why was Amanda so terrible? Well you see there is this new guy at work, Cade, who asked her out and she went on a date with him. Only things were meh and she knows she doesn't want to see him anymore. She just doesn't like him like that. And the next day at work after the date she is talking with her bestie she works with and realizes that bestie actually really likes Cade. So she really shouldn't go out with him anymore since she is so meh on him. And then almost immediately after that conversation Jordan invites her to his game with a plus one and she goes and asks Cade to come with her. She doesn't make sure he knows it is as a friend, that she needs a buffer to pretend to be dating her or something, no she leads him on. And worse she just told her friend she didn't like him, that her friend really likes him, and she still pretends to keep dating him. So she is nice to Cade, leading him on when he really likes her, and horrible to her friend who just told her how she felt. It was like really? This is how you treat your friends? I am glad I am not your friend.

Now as I said above she is also incredibly insecure. She has soooo many insecurities there is no way I actually believe a relationship will work between these two. Because how is she going to deal with him traveling all the time? She won't. And what about what other people might think about her. I am sure at some point someone is going to say she is only with Jordan for his money and fame and Amanda actually cares what everyone thinks about her and will not like that. Really I can see her breaking up with him over that because she is so insecure and cares what others think way too much. It doesn't matter that Jordan knows she is not like that, if anyone even mentions it, like his manager or someone did once, she will not handle that well. I know she loves her job and wants to keep it, but realistically for this to maybe work I see her quitting so she can travel with him. But then she will have to wait around for him all the time to be done with training and games and everything and she wouldn't be able to handle that either. I mean she could barely handle it in the confines of this story, how will she deal when it is her day to day life? There is no possible way it works out between these two unless Amanda gets some help with her issues. No way. So the happily ever after was more of a maybe happily for a few months. It wasn't good. I mean at the end it was Amanda is going crazy with her insecurities so lashing out and trying to make it seem like they are not even serious and Jordan leaving her because he was upset, then two second later she is all sad, of course I love him, let's get married and have babies right away cause they always make things better. Yeah, so wouldn't have worked for these two.

Now I liked Jordan. He was really sweet. He knew exactly what he wanted even at a young age and didn't play games. Amanda was always it for him so when he has a chance with her again he takes it. I did feel bad for him at times because he was wonderful and she was a mess. Oh well, he couldn't save the book for me.